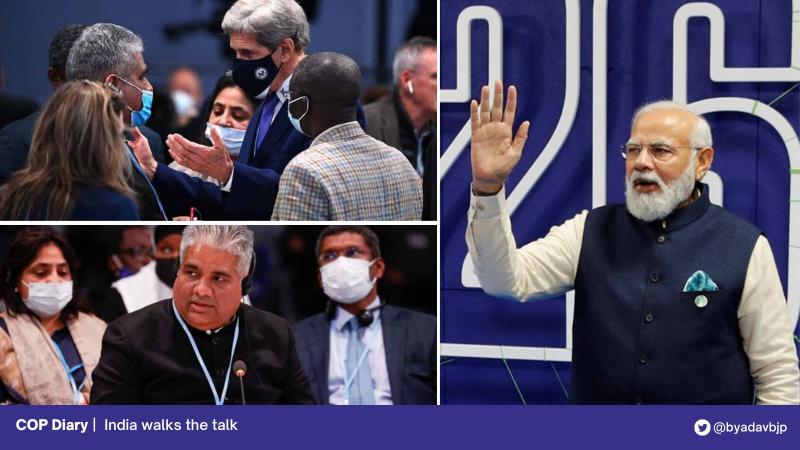 It is curtains down on 26th session of the Conference of the Parties (COP26) to the United Nations Framework Convention on Climate Change (UNFCCC) in Glasgow. The experience of interacting with so many different minds was enriching. The various bilateral and multilateral engagements that we participated in have helped us all broaden our vision and firm up our resolve to fight climate change.

The summit proved to be a success from India’s standpoint because we articulated and put across the concerns and ideas of the developing world quite succinctly and unequivocally. India presented the way for a constructive debate and equitable and just solutions at the forum.

Consensus, however, remained elusive at COP26.India has maintained that the current climate crisis has been precipitated by unsustainable lifestyles and wasteful consumption patterns mainly in the developed countries. The world needs to awaken to this reality.

Hon’ble Prime Minister Shri Narendra Modi gave a new mantra for sustainable development at COP26. He said ‘LIFE’, that is, Lifestyle for Environment can be the foundation for the same. “The world today admits that lifestyle has a major role in climate change. I propose a one-word movement before all of you. This word is LIFE which means Lifestyle for Environment. Today, it’s needed that all of us come together and take forward LIFE as a movement," PM Shri Modi said.

When facing challenges of a planetary scale, such as climate change, the message of ‘vasudhaivkutumbakam’ or the ‘world as one family’ needs to be amplified more than ever. India’s message to the world is that it needs to shift towards lifestyles that value moderation over excess.

2. India will meet 50 per cent of its energy requirements with renewable energy by 2030.

3. India will reduce its total projected carbon emissions by one billion tonnes from now to 2030

4. By 2030, India will reduce the carbon intensity of its economy to less than 45 per cent.

5. By 2070, India will achieve the target of net zero emissions.

India, under Shri Narendra Modi, has proactively taken the lead in creating the International Solar Alliance, Coalition for Disaster Resilient Infrastructure (CDRI) and the One Sun, One World, One Sun Grid initiatives as examples of international collaboration to combat climate change.

Having done its part, India at the summit, asked the developed world concrete actions in this decisive decade and translation of commitments to actions.

Fossil fuels and their use have enabled parts of the world to attain high levels of growth. Even now, developed countries have not completely phased out coal. The United Nations Framework Convention on Climate Change (UNFCCC) refers to mitigation of GHG emissions from all sources. UNFCCC is not directed at any particular source.

Developing countries have a right to their fair share of the global carbon budget and are entitled to the responsible use of fossil fuels within this scope.

Climate friendly lifestyles and climate justice as enshrined in the Paris Agreement are the key to solving the climate crisis. We can proudly say today that India is the only G20 nation well on track to achieve the goals mentioned under the Paris Agreement.

While there has been a lot of talk about and around Nationally Determined Contributions (NDC), the lack of commitment on climate finance is troublesome. There is a wide mismatch between climate finance and mitigation efforts. The record on means of implementation support to developing countries has been dismal so far. India looks forward to a change in finance and technology support to developing countries going forward.

As I conclude my engagements at COP26 and return home, India is hopeful that the world will rise to the urgency of the climate crisis facing us and that alone will ensure we have real actions to save our planet for the future generations.

India, I am happy to note, that we achieved some remarkable results in terms of climate finance issues including a work program on new collective quantified goal, support for enhanced transparency framework for developing countries, Article 6 rule book, adaptation and common timeframe, at the COP26 negotiations.