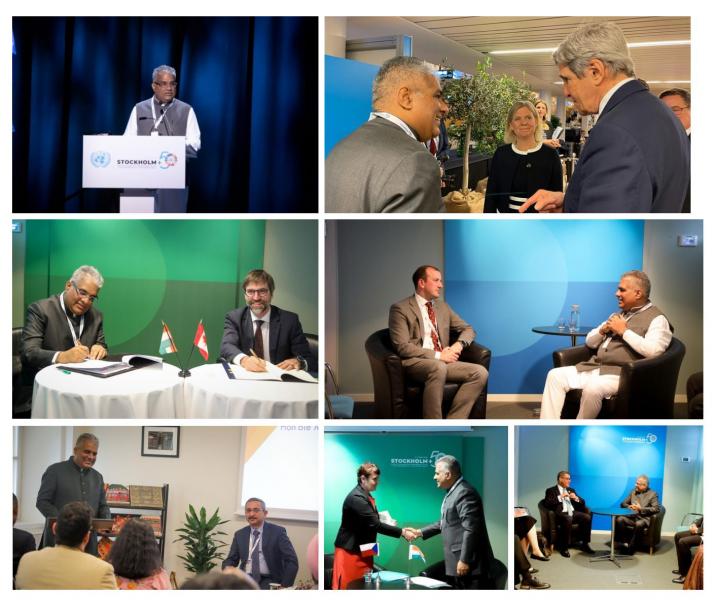 The second day of Stockholm+50 was spent with countries presenting their national statements and representatives participating in a series of leadership dialogues. Participating nations put forth their ideas and concerns in the global fight against climate change.

The completion of 50 years of United Nations Conference on the Human Environment, which made environment a pressing global issue for the first time, is an occasion that offers the world an opportunity to reflect on what it has achieved in its endeavour to save the planet from the scourge of rising world temperatures, degradation of land, pollution of air and oceans, extinction of crucial wildlife and ever-rising hazardous and chemical waste.

There is no doubt that we are still facing a crisis, a crisis whose magnitude is so big it threatens to wipe us all out, drowning us in the waters released by our melting glaciers, choking us on the air we breathe and burying us under the mounds of waste we are generating every second.

Fifty years ago when Stockholm Declaration and Action Plan for the Human Environment came into being with the support of 122 nations there was clarity that we needed a mechanism for the world to come together even as individually nations acted at their own levels to halt further damage to planet Earth, its air, water, land and all life forms. The formation of the United Nations Environment Programme was a reflection of that clarity.

Half-a-century later, we have a mechanism in place at the level of individual nations and at the level of the global community to save Earth. Environment is now a matter of public policy world over. We have in place a global commitment for a healthy planet and a climate-conducive lifestyle.

Stockholm+50 is an occasion to assess if that global commitment is working and where are the roadblocks. Presenting our National Statement here yesterday, I reiterated that India aims “for a futuristic, inclusive and sustainable development. Towards this ambition, India has worked with partners for significant global initiatives that include the Leadership Group for Industry Transition, International Solar Alliance, Infrastructure for Resilient Island States, and Coalition for Disaster Resilient Infrastructure”.

On multiple occasions India has reminded the world that the principles of UNFCCC like equity, Common But Differentiated Responsibilities and Respective Capabilities are the basis for providing a dignified life to all across the world based on respective national circumstances. The ‘global commitment’ underlines that the developed nations that have been historical polluters rise to the occasion and fulfil their commitment for climate finance.

For the mechanism on which work started 50 years ago to function 50 years later, it is imperative that commitments made are also met.

India has also maintained that while we will keep raising the concerns of developing nations, we will fulfil our global commitments because we are all in this together and India is a responsible global partner.

The world today is grappling with questions of how adoption of best practices and sound management of resources, which doesn’t happen at the cost of a decent standard of life for all as a basic tenet of climate justice, is ensured.

To ensure that we make the best use of our resources, the Honourable Prime Minister has brought the focus back on three Rs - reuse, recycle and reduce. NITI Aayog in India is working towards policy implementation of this environmentally friendly consumption cycle.

Prime Minister Narendra Modi in his address to the nation on Independence Day in 2021 emphasized on Mission Circular Economy. The Budget for 2022-23 provides a roadmap to achieve that circular economy. It recognises that development and environmental conservation need to be aligned and not be treated as exclusive of each other.

The Basel Convention that came into force in 1992 intends to reduce transboundary movements of hazardous waste from developed to less developed countries (LDCs), and ensure their safe disposal as closely as possible to the source of generation.

Rotterdam Convention, which entered into force on 24th February 2004, covers pesticides and industrial chemicals that have been banned or severely restricted for health or environmental reasons by Parties.

The Stockholm Convention is a global treaty to protect human health and the environment.

India’s approach of LIFE and adoption of Mission Circular Economy show the road for the world to align not just the objectives of the three conventions but also its development needs and address issues of climate change and environmental degradation. What India is offering to the world and adopting in its domestic sphere is the road to a sustainable planet where consumption is limited but standard of life is not compromised, where development to ensure a good quality life for all humans doesn’t come at the cost of environment.