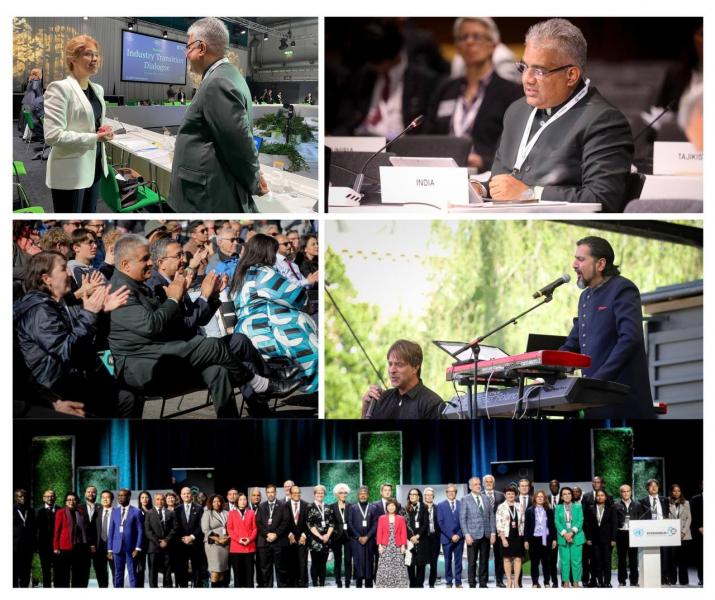 Stockholm+50 Diary: Environmental oneness is the road ahead

Being in Sweden this time of the year was my first experience of seeing midnight sun, a natural phenomenon experienced around North Pole from March to September. You go to bed with the sun shining bright outside and you wake up and find the sun still out. So how do people like us who know when it is time to sleep and when to wake up depending on the sun’s light get to differentiate morning from night?

I, on my part, found the answer in the chirping of birds. At around 4-4.30 am the birds start chirping and I get to know it is time to wake up. The phenomenon not only told me what time it is but also sensitised me to the fact wildlife is more in sync with nature than us humans.

The Stockholm Declaration, which was adopted by the United Nations Conference on the Human Environment, put humans at the centre of the fight to environmental degradation and climate change by the raising the pitch for ‘Environment for Humans’.

Between 1970 and 2020, a span of 50 years, global population doubled from about 3.7 billion to 7.7 billion. Our expansion has meant that the space for other life forms and shrunk and suffered. In a man-animal conflict, ultimately man has won due to greater brain power but our brain power must not let us forget that our continued existence is dependent on the existence of other life forms.

At Stockholm+50, it is time for us to remind ourselves that the fight against environmental degradation cannot be fought and won without us understanding that our wildlife, our land, our natural resources are all as important as us if not more. It is time to say in one voice ‘Environment for Everyone’.

The Eastern Philosophy has this idea of ‘environmental oneness’ ingrained in it. Mahatma Gandhi’s virtues of non-violence, self-sufficiency, and simplicity, even if not explicitly environmentalist, were wholly consonant with environmental goals.

It is the idea that Honourable PM Shri Narendra Modi has reminded the world of in talking about LIFE, Lifestyle for Environment, and by underlining that our possessions shouldn’t be based on what we can buy but what we need.

All our policies and initiatives, national and international, are pivoted towards achieving this ‘environmental oneness’. It is the direction that the world needs to follow in order tide over the current crisis.

The LeadIT Group, since its launch at the UN Climate Action Summit in 2019 by Sweden and India, has worked to build global momentum on mitigation in hard-to-abate sectors. Its participation has since grown. With Japan and South Africa, the latest members of the initiative, the membership of LeadIT Group has risen to 37, including countries and companies together.

The dialogue consisted of a couple of panel discussions, the first of which was chaired by First Mover’s Coalition with special remarks by John Kerry, US Special Presidential Envoy for Climate. He briefed the audience about the objectives of LeadIT coalition and called for increasing its membership to facilitate action on ground. The CEO of Mission Possible, Matt Rogers talked about the role of heavy industries and hard to abate sectors in the global ambition to contain climate change.

It cannot be stressed enough that ‘transition’ needs to be understood within appropriate developmental context. Representing India’s stance on the issue, I reiterated that for developing countries, ‘transition’ should provide opportunities for growth along a low-carbon development pathway. The transition trajectory will be different for different countries based on their national circumstances. Developed countries, which are the major contributors to the climate crisis, with their historical experiences, must take lead in the global transition towards net-zero and low carbon industry transition.

Post the LeadIT event, I participated in a discussion on BRS Conventions for moving towards a lifecycle management of chemicals and wastes. The Basel, Rotterdam and Stockholm (BRS) Conventions are multilateral environmental agreements, which share the common objective of protecting human health and the environment from hazardous chemicals and wastes.

Hazardous waste and chemicals are a threat to sustainability and the lives of our birds and animals who are directly exposes to them on earth and in water. In India, the Hon’ble PM realises the importance of tackling the menace and therefore Budget 2022-23 was a Green Budget that focuses on building a circular economy.

Since such waste directly impacts the quality of soil and causes soil land degradation, nearly 23 crore Soil Health Cards were issued between 2015 and 2019 under the leadership of PM Modi. The cards have together led to an 8-10% decline in the use of chemical fertilisers and raised productivity by 5-6%.

During UNCCD (United Nations Convention on Combating Desertification) COP15 in Ivory Coast recently, I saw the world acknowledge and appreciate India’s efforts on the front of halting and reversing soil degradation.

This was followed by an Expert Panels on the Action agenda for sustainable development organised by the Council on Energy, Environment and Water.

India, under Honourable PM Shri Narendra Modi, has been a strong proponent of inclusive and just climate action which allows for socio-economic development and industrial growth while promoting environmental conversation.

Later in the evening, I attended a music festival by Grammy Award winner Ricky Kej, whose work in the field of environmental protection is well known. He centered his performance on the protection and preservation of Ma Ganga, Elephants and small island states faced with drowning due to rising sea levels.

India’s statement at the UN Conference on the Human Environment in 1972 in Stockholm noted that: "We do not wish to impoverish the environment any further and yet we cannot for a moment forget the grim poverty of large numbers of people.”

India today is well on the path of implementing ways to eradicate poverty and contribute to sustainable development pathways, taking a global lead.

Post the music fest, I met and interacted with the Indian diaspora. The national consciousness among the diaspora has been stirred by Hon’ble PM Modi’s leadership which shows in the way members of the diaspora are contributing to raising India’s pride. In Sweden, the diaspora is working in important sectors such as IT and setting an example for the world.

The day ended with a dinner hosted by Swedish Foreign Minister Ann Linde and Environment Minister Annika Strandhall. Thankful to the ministers for their hospitality.