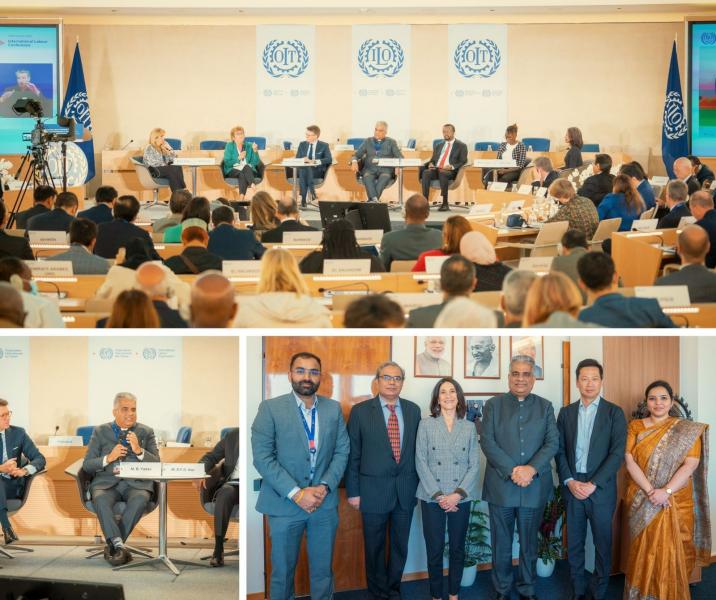 On Day 2 of the engagements at the International Labour Conference in Geneva, I participated in the World of Work Summit Panel Discussion.

The panel discussion revolved around questions thrown open to the audience and inviting their responses. The first question before the audience was:

The world of work is facing multiple challenges which are putting the global labour market recovery at great risk. Among these multiple challenges, is there one that we should be paying more attention to, that it is more urgent to solve than the others?

a) The fallout from the ongoing war (food, finance and fuel crises)

b) High levels of informality, poverty and unemployment

c) Growing inequalities between countries and within societies

The poll results threw Option B as the one most thought deserved the greatest attention with Option A, C, D and E following closely.

Presenting India’s viewpoint on the question, I stated that we live in a time when the global pandemic has hit our economies adversely but also in times where digitisation has opened newer opportunities and we must leverage the full potential of the digital world to tide over our challenges.

I summed up the challenges and laid out the way in which India was resolving them in six points.

1) We must accord protection to our informal/unorganised workers.

I explained how India, under PM Shri Narendra Modi, is doing just that by undertaking initiatives such as e-Shram where 280 million workers have registered so far.

I explained how jobs that have been created as a result of digitisation have been defined under the four new Labour Codes of India and how India is working towards making funds available for them.

According to the Code on Social Security, the government will “establish a social security fund for social security and welfare of unorganized workers, gig workers and platform workers.”

To address concerns of migration of workers, India is undertaking surveys to identify causes of migration and maintain data of migrant workers. This is being done to ensure benefits of social security percolate.

India is taking steps to address the skill gaps by focusing not just on the skilling of youth entering the workforce but also on older workers’ reskilling and upskilling. Over the last 6-7 years, the government has focused on utilising fully the facilities available in industry for imparting practical training to meet the requirements of skilled manpower for the industry.

India has in place schemes like Pradhan Mantri Shram Yogi Maandhan Yojana and Swanidhi Scheme to help workers live a life of dignity even after they cross the working age.

6) So many demographic changes

Over time the world will be confronted with declines in the rate of population growth, some shifts in the overall shares of the global working-age population will take place over the coming decades. The preparation for that time when we may face a dearth of working population and will have an ageing population who would need social security having worked all their lives will be important.

The fellow panellist Pierre-Yves Dermagne agreed that rising inequality was a concern for the world and that it needed to be worked upon. He highlighted how the pandemic had accentuated this gap and impacted the most vulnerable sections. He drew attention to the need to work for those at the end of chain.

Ms Isabelle Durant drew the attention of the fact that the world must address the debt crisis to ensure it can work on other aspects of human development and workers’ rights. She highlighted that in developing countries most jobs are in the informal sector and the digital divide has hit them particularly hard.

On her part, Ms Saida Neghza underlined that everything we do is human-centric and so all our efforts at recovery have to focus on humans to emerge stronger.

Mr Omar Faruk Osman Nur spoke about how the pandemic had led to reduced wages for the people of Somalia and how a host of factors including climate change were impacting the working population.

The second question thrown open was:

In your view, what can the international community do to enable a human-centred recovery?

a) Reform of the multilateral system to provide increased policy coherence

b) Redirecting finance to least developed and other developing countries

The most votes were polled for Option A: Redirecting finance to least developed and other developing countries.

It is imperative that the developed world opens its purses and makes the promised climate finance and technology transfer available to protect our workers. Mitigation alone won’t help but we must also discuss adaptation and the funds needed for such adaptation by the developing countries.

Ms Isabelle Durant said the problem of debt stress needs to be addressed by the International Monetary Fund and that we must rethink the debt for nature. She stressed that addressing these problems is necessary to avoid in countries that do not have the wherewithal to tide over the problem on their own.

The panel agreed that a human-centered recovery was the only way out of the crisis being faced by the world and that the developed world must rise to the occasion and help countries that are in need because poverty anywhere is a threat to prosperity everywhere.