Today proved to be a momentous day for the global push towards renewable energy with the US formally joining the International Solar Alliance (ISA) launched by PM Shri Narendra Modi in 2015.

U.S. Special Presidential Envoy for Climate John Kerry announced at the UNFCCC COP26 today that the United States has joined the ISA as a member country. With the US coming on board, the tally of ISA members has risen to 101. It is heartening to note that 101 countries across the worlds have joined the framework agreement of the ISA to catalyse global energy transition through a solar-led approach. The feat reflects PM Shri Modi’s hard work and dedication to the cause of fighting climate change.

Talking about the importance of the US joining ISA, I said, “We welcome the United States of America as the 101st member of the ISA. This move will strengthen the ISA and propel future action on providing a clean source of energy to the world.”

Signing the framework agreement, Mr John Kerry said, “It has long been coming, and we are happy to join the International Solar Alliance, which Prime Minister Narendra Modi took the lead in making. We worked out the details and this is a process we are pleased to be a part of. This will be an important contribution to more rapid deployment of solar globally. It will be particularly important for developing countries.”

The ISA is a global alliance of countries initiated by India, most of them being sunshine countries, which lie either completely or partly between the Tropic of Cancer and the Tropic of Capricorn.

The ISA’s major objectives include global deployment of over 1,000 GW of solar generation capacity and mobilisation of investment of over US$ 1000 billion into solar energy by 2030. The ISA envisions to enable the full ecosystem for availability and development of technology, economic resources, and development of storage technology, mass manufacturing and innovation.

The Alliance has a 24×7 Solar Cyber Centre to give open access to all nations for advice and information on projects and financial innovation.

The launch of ISA was announced by PM Shri Narendra Modi and Mr Francois Hollande, former Hon’ble President of France on 30th November 2015, at the 21st session of United Nations Climate Change Conference of the Parties (COP-21) in Paris, France.

Adopting a collaborative approach, India first circulated the framework was first circulated for countries’ support in 2016. The framework emphasises delivering global relevance and local benefit to all countries through collaborations, with ISA’s key interventions focusing on readiness & enabling activities, risk mitigation & innovative financing instruments to facilitate the promotion and deployment of solar technologies in target markets.

The approach and methods detailed in the framework have already delivered results, with ISA building a solar project pipeline of nearly 5 GW installed capacity. The approach detailed in this framework will culminate in a vision for interconnected global grids, which was formalized and jointly launched as the ‘Green Grids Initiative – One Sun One World One Grid’ (GGI-OSOWOG), during the World Leaders Summit of the COP26 in Glasgow on 2nd November 2021 by the UK Presidency of COP26 and India Presidency of ISA.

ISA’s six programmes - Solar Applications for Agricultural Use, Affordable Finance at Scale, Mini Grids, and Solar Rooftops and Solar E-mobility and Storage and Large-Scale Solar Parks - could be a game changer for environment conservation efforts. 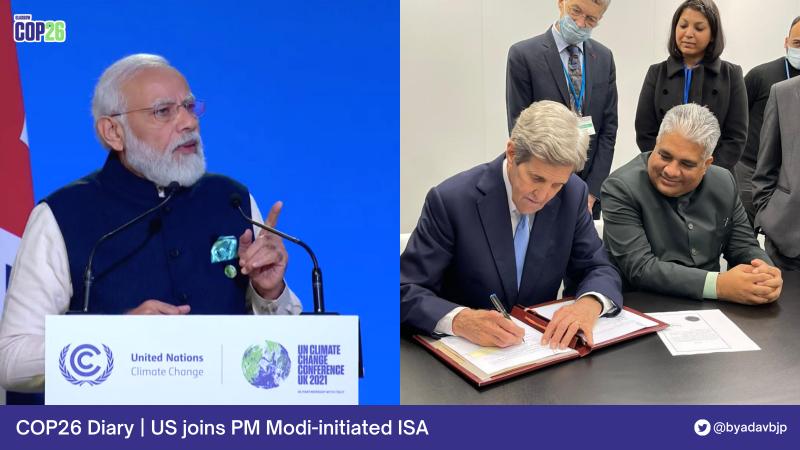