Negotiations to fight climate change at COP26 in Glasgow have been happening in an atmosphere of cooperation and mutual respect for each other’s ideas, strengths and constraints. Each side has put its point across the table emphatically because clear speaking is critical to positive and meaningful outcomes.

India, under the leadership of PM Shri Narendra Modi, has made it clear that it ready to walk the extra mile in combating climate change but has also reminded the developed world that they have historically precipitated the current crisis and have progressed at the cost of global environment. No nation, no matter how big or small, can save the planet alone. In a spirit of cooperation, India has asked the world to do its bit, leading by examples in meeting all its environmental obligations – globally and nationally.

As we move towards wrapping this very crucial climate summit, the world needs to come together to honour the commitments made under the 2015 Paris Agreement and take immediate steps towards adaptation and making climate finance available for the developing world to make the crucial transitions – socially and economically to offset climate change.

The wealthy nations that reaped the benefits of early industrialisation by burning fossil fuels and growing their economies for centuries must accommodate the concerns and needs of the economies that need to make the switch to clean and green energy.

There is growing public demand for climate action and to align economic recovery with long-term sustainability and climate goals. Given the renewed interest in collective action, COP26 offers a unique opportunity to enhance ambitions and reiterate the global commitment to combat climate change.

There are four issues on which the world must start acting together.

During the Pre-COP26, Glagow, 2021, negotiations, “Keeping 1.5 degree C alive” became slogan. To achieve this target, the developed world must share the required technology and finance with the developing world.

Let’s move to mitigation next.

Prime Minister Shri Narendra Modi said in Glasgow that adaptation has received less attention compared to mitigation in the global climate debate. Addressing COP26 side event on 'Action and Solidarity - The Critical Decade' convened by British Prime Minister Boris Johnson, PM Shri Modi referred to the adverse impact of climate change including change in cropping patterns and the increasing frequency of floods. He said, "When compared with mitigation, adaptation has received less attention in the global climate debate. The developing countries are facing injustice as they are most affected by climate change… Climate change is a big challenge for farmers in India and other developing nations. There is a change in the cropping pattern. Corps are getting destroyed by rains, floods and other natural phenomena," he said.

The developing countries are doing their bit by way of voluntary declaration through NAMAs (Nationally Appropriate Mitigation Actions). Demand for work programme on Long-Term Cooperative Action (LCA), including commitments, were made from developing countries in Bali, COP13, 2007.

The world cannot wait any longer for this critical finance to save itself from climate change and accompanying environmental degradation.

As has been stated every single individual has to come together to fight climate change. It is the responsibility of each country. The Annex-I countries, the Economies in Transition (EITs), the underdeveloped world must all follow the Paris Agreement that they are signatories to for the world to tide over the climate crisis. 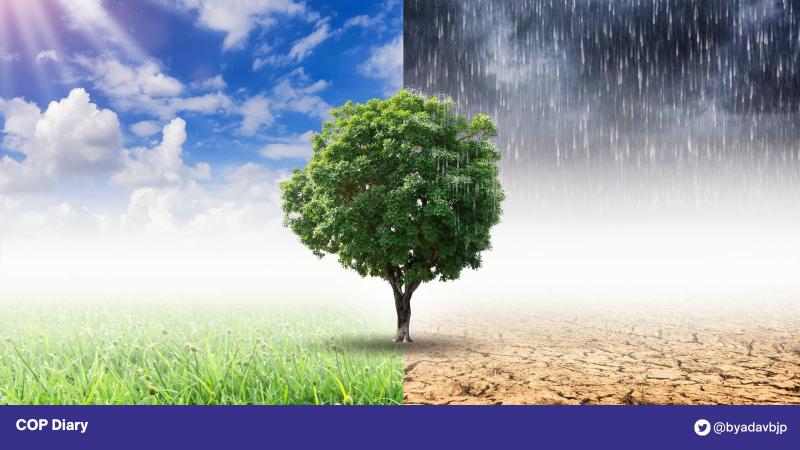