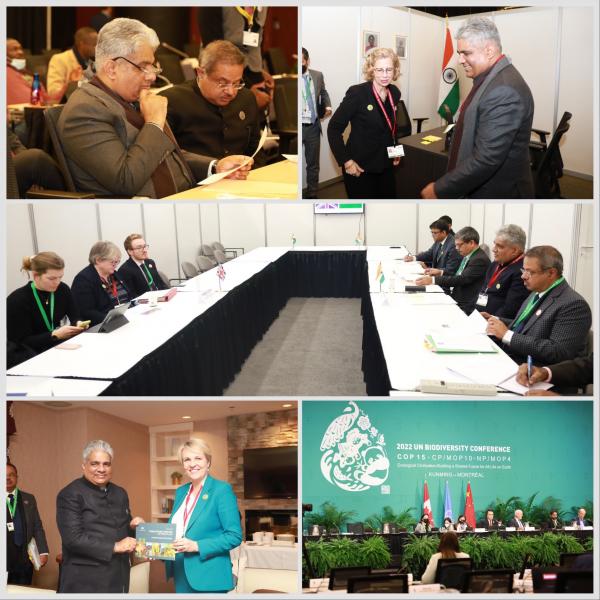 Over the last 100 years, mankind has made significant progress on almost all fronts from construction to communication, from medicine to mobility that made lives easier. Alongside grew consumerism and consumption. And all of it precipitated in a climate crisis that not just threatens to reverse all development but also the existence of the very planet we inhabit.

To build consensus on the way to wriggle out of the problem, the world gathers at three conferences each year to devise solutions – one that aims to control the global temperature rise, one that aims to control and reverse land degradation and one that aims to conserve biodiversity and reverse its losses. Needless to mention that each one feeds into the other to collectively fight climate change. The success of all three is important to ensure we are able to change the course of plundering of the earth and its resources towards sustainable development.

Such conferences also serve as opportunities to turn attention to historical polluters and demand accountability. Those who have mindlessly used the earth’s resources, generating unquantifiable amounts of waste imperilling our glaciers, our oceans and our land cannot turn the clock back. They cannot undo what has happened. What they can do instead is participate actively, taking the lead role, in creating a level field where countries that have lagged behind in development are able to ensure they meet Sustainable Development Goals in their regions and also contribute to the fight against climate changes by making the switch to climate conducive development methods. This level playing field cannot be created unless the developed countries walk the talk on their promises on climate finance and technology transfer.

The MDGs had 8 goals, the SDGs have 17 goals, the Aichi Biodiversity Targets were 20 and the Global Biodiversity Framework (GBF) may have 23 targets. The increased expectations through these targets call for matching means of implementation, especially through public finance for developing countries. Our only source of funding remains the Global Environment Facility that caters to multiple Conventions. Modern technologies, especially information technology, can assist our goals. Hence the Digital Sequencing Information must be linked to access and benefit sharing in a just and fair manner.

In the last 50 years, human activities have caused the world’s wildlife populations to plummet by more than two-thirds.According to one study, one million of the estimated 8 million plant and animal species on the planet are estimated to be at risk of extinction, many within decades, because of human activities, unless action is taken to reduce the intensity of drivers of biodiversity loss.

The post-2020 global biodiversity framework arrived at the UN Biodiversity Conference, COP15, which concluded in Montreal, Canada recognises the importance of urgent action.

It acknowledges that the biosphere, upon which humanity as a whole depends, is being altered to an unparalleled degree across all spatial scales. It says: “Biodiversity – the diversity within species, between species and of ecosystems – is declining faster than at any time in human history.”

Nature can be conserved, restored and used sustainably while other global societal goals are simultaneously met through urgent and concerted efforts fostering transformative change.The post-2020 GBF agrees that the direct drivers of change in nature with the largest global impact have been changes in 1) land and sea use, 2) direct exploitation of organisms, 3) climate change, 4) pollution and 5) invasion of alien species. The five direct drivers result from an array of underlying causes and that the rate of change in the direct and indirect drivers differs among regions and countries.

Prime Minister Narendra Modi has often said all climate action policies must have community interest at the heart because indigenous communities have for long been the custodians and protectors of biodiversity. The post-2020 GBF acknowledges the important roles and contributions of indigenous peoples and local communities as custodians of biodiversity and partners in the conservation, restoration and sustainable use.

It says that the implementation of the Framework must ensure the rights, knowledge, including traditional knowledge associated with biodiversity, innovations, worldviews, values and practices of indigenous peoples and local communities are respected, documented, preserved  with their free, prior and informed consent, including through their full and effective participation in decision-making, in accordance with relevant national legislation, international instruments, including the United Nations Declaration on the Rights of Indigenous Peoples, and human rights law.

It also recognises the 1986 United Nations Declaration on the Right to Development, the framework enables responsible and sustainable socio-economic development that, at the same time, contributes to the conservation and sustainable use of biodiversity.

India has been a vocal supporter of the Right to Development to ensure populations in developing countries achieve the goals and targets set as per Sustainable Development Goals and can live dignified lives. India has also been walking the talk on conserving biodiversity.

Despite its population size, India’s forest and tree cover aresteadily rising, together with wildlife population. In an ambitious step, reflecting PM Modi’s resolve to correct ecological wrongs, the iconic cheetah has been reintroduced in Indian habitats. India has taken a quantum jump in the number of declared Ramsar sites to the current figure of seventy-five.

India understands that road ahead in protecting the planet is long and difficult. But India believes global partnerships can help ease the way towards a sustainable planet. The country is thus leading the G20 Presidency under the theme of ‘Vasudhaiva Kutumbakam’ or ‘One Earth · One Family · One Future’.