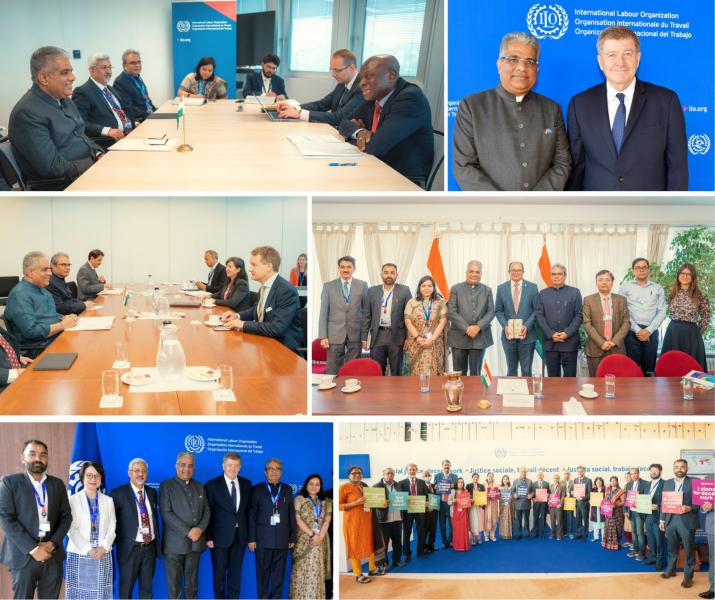 Since 1919, the International Labour Organization (ILO), headquartered in Geneva, has been working with member countries to advance social and economic justice for working class populations by setting and enforcing international labour standards.

In that sequence, the 110th International Labour Conference (ILC) is underway in Geneva with representatives of governments, workers and employers from 187 ILO Member States in participation.

I arrived in Geneva yesterday (June 9), as a representative of India, to participate in the same and to present to the world what India is doing for its workers, find ways for enhanced global cooperation for our workers’ welfare and to learn from the best of international practices.

This year, focus on occupational safety and health, apprenticeships, as well as the social and solidarity economy, are among the items on the agenda of the Conference.

One of the issues that came up for discussion was worker migration. Migrant workers contribute to growth and development in countries of destination, while countries of origin benefit from their remittances and the skills acquired during their migration experience.

The migration process, however, involves complex challenges in terms of governance, workers’ protection and international cooperation. The ILO works to forge policies to maximise the benefits of labour migration for all those involved.

My discussions with member states revolved around this important aspect of global labour mobility.

For social security within India, I highlighted to the delegates that India over the past 7-8 years has introduced technology and simplified systems to ensure that each worker enjoys dignity and choice of employment with social security.

To address the concerns of informal sector workers, in August 2021, India launched e-Shram, a digital portal, to register workers of the unorganised sectors with the intention to develop a national database. A database of about 280 million workers’ has already been created with workers following more than 400 occupations registered on it. The database aims to help with better dissemination of social welfare schemes for informal workers.

About 3.2 million street vendors have been provided collateral free loans to help them resume their businesses after the Covid-induced lockdown under Swanidhi Scheme.

India is leaving to stone unturned to reach out with social security benefits to its unorganised workers and at the International Labour Conference, I highlighted the same to the world.

One of the key issues facing the world economy today is that of skill gaps. Skills gaps exist where employers feel that their existing workforce have inadequate skill types/levels to meet their business objectives. With technological advancements and AI becoming an important aspect of life, skilling of workers is of prime importance.

The first to step to fill that gap is skill mapping. India, under the Honourable PM, is focused on evidence-based policy. Skill mapping thus is crucial to our efforts to bridge the skill gap.

Towards that end, Skill India or the National Skills Development Mission of India, was launched by Prime Minister Shri Narendra Modi in 2015.

The government even started a skill mapping of workers returning from overseas due to the pandemic. The Government of India launched a new initiative SWADES (Skilled Workers Arrival Database for Employment Support) to conduct a skill mapping exercise of the returning citizens under the Vande Bharat Mission.

A key aspect of meeting skill gaps, addressing migration concerns and many such workers-related issues can be handled better if due focus is laid on apprenticeship.

ILO states that quality apprenticeships based on a robust regulatory framework and social dialogue can contribute to lowering youth unemployment rates, reducing skills mismatch and enhancing the productivity and competitiveness of enterprises.

While apprenticeships have so far been considered primarily a means to facilitate the school-to-work transition for young, in today’s world of work, the apprenticeship model is about empowering both the young and older workers so that they can acquire new skills, reskill and upskill throughout their working lives.

In India, the Apprentices Act was enacted in 1961 and it regulates the programme of training of apprentices in the industry so as to conform to the syllabi, period of training. Over the last 6-7 years, the government has focused on utilising fully the facilities available in industry for imparting practical training to meet the requirements of skilled manpower for the industry.

I highlighted the same during my interactions with delegates of other nations and found them appreciative of India’s efforts to modernise its workforce while committedly working for its social security.

During the course of my interactions in Geneva, I met with outgoing ILO DG Guy Ryder, who has been in office since 2012. I also met the incoming DG Gilbert F. Houngbo from Togo who will take office in October this year.

The interactions were deeply fruitful. While the global community appreciates India’s efforts in securing workers’ rights, there was also enthusiasm to deepen ties towards advancing social and economic justice for working class populations by setting and enforcing international labour standards.