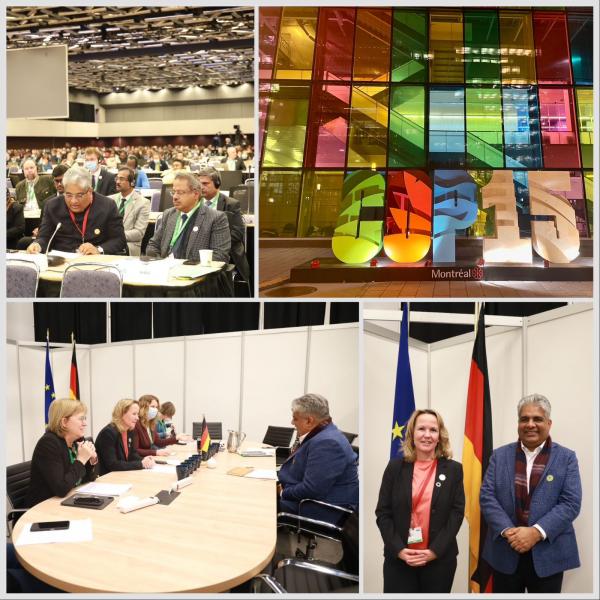 Biological diversity and ecosystems are essential to life, including the rights to life, to health, to food, to water, to culture, and to a healthy environment. The United Nations Biodiversity Conference, COP15, reiterated this basic point as it drew to a close today.

Amid heavy snowing in Montreal, more than around 190 countries adopted the United Nations agreement to protect nature today. The Kunming-Montreal Global Biodiversity Framework (GBF) is aimed to protect 30 per cent of the Earth’s land and oceans by 2030.

The GBF aims to respond to several assessments that provide ample evidence that despite ongoing efforts, biodiversity is deteriorating worldwide at rates unprecedented in human history. The framework outlines an ambitious plan to implement broad-based action to bring about a transformation in our societies’ relationship with biodiversity by 2030 and ensure that, by 2050, the shared vision of living in harmony with nature is fulfilled.

India had negotiated strongly and held discussions with the COP Presidency and the Secretariat of the Convention on Biological Diversity before the final GBF was put up for adoption. The suggestions from India to keep all the goals and targets, globally, were accepted, along with other propositions.India’s pitch for LiFE, Lifestyle for Environment, and common but differentiated responsibilities and respective capabilities found an echo in the GBF.

The framework said, “Enhancing communication, education, and awareness on biodiversity and the uptake of thisframework by all actors is essential to achieve its effective implementation and behavioural change, promote sustainable lifestyles and biodiversity values…”

It suggested, “Integrating transformative education on biodiversity into formal, non-formal and informal educational programmes, promoting curriculum on biodiversity conservation and sustainable use in educational institutions and promoting knowledge, attitudes, values, behaviours and lifestyles that are consistent with living in harmony with nature,” as a way to achieve the aforementioned goals.

The GBF noted that the biosphere, upon which humanity as a whole depends, is being altered to an unparalleled degree across all spatial scales. It expressed hope that nature can be conserved, restored and used sustainably while other global societal goals are simultaneously met through urgent and concerted efforts fostering transformative change.

In a move that India fully supports and endorses, GBFacknowledged the important roles and contributions of indigenous peoples and local communities as custodians of biodiversity and partners in the conservation, restoration and sustainable use and said that its implementation must ensure their rights, knowledge, including traditional knowledge associated with biodiversity, innovations, worldviews, values and practices of indigenous peoples and local communities are respected, documented, preserved with their free, prior and informed consent, including through their full and effective participation in decision-making, in accordance with relevant national legislation, international instruments, including the United Nations Declaration on the Rights of Indigenous Peoples, and human rights law.

As a leading voice of developing countries, India has at every forum said that each country has a right to development and the shift to sustainable development cannot be at the same pace for all countries given their domestic circumstances.India believes every effort counts in the fight against climate change and therefore all countries and individuals are together in the fight but not everyone can contribute to the same extent.Developed countries with their historical contribution to the current crisis ought to take the lead in this sphere.

Further, the GBF stated that successful implementation of the framework will depend on ensuring gender equality and empowerment of women and girls and reducing inequalities.India has always maintained that development should not just be women-centric but also women-led. Since climate change and biodiversity loss has a greater impact on the most vulnerable, they need to be protected and made part of the process before others.

The GBF said that the implementation of the framework should be guided by the principle of intergenerational equity which aims to meet the needs of the present without compromising the ability of future generations to meet their own needs and to ensure meaningful participation of younger generations in decision making processes at all levels.

Following Mahatma Gandhi, Hon’ble PM Shri NarendraModi’s government believes we are merely custodians of the planet and have to pass it on to the next generation. We must therefore keep it in a good enough shape for our coming generations to be able to enjoy life.

As COP15 draws to close with negotiations having ended and a framework in place it is time for countries to start implementing the agreement reached in their respective countries. On India’s part, the work on biodiversity conservation and restoration is showing results under Hon’blePM Modi in the form of expanding forest cover, risingnumber of Ramsar sites and the return of cheetah. With Project Lion, Project Tiger, Project Elephant and Project Cheetah, India is working full throttle to ensure a sustainable planet that can be handed over to the next generation.