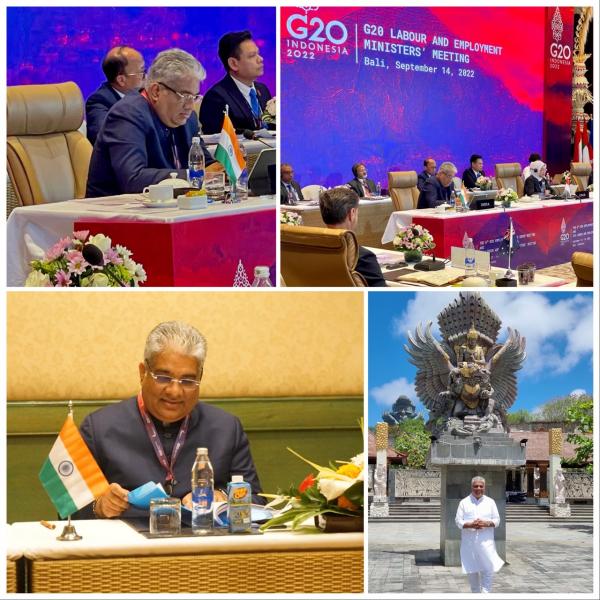 After attending the G20 Joint Environment and Climate Ministers Meeting in Indonesia’s Bali, I happened to visit the Land of Gods for the second time in about a fortnight to attend the G20 Labour and Employment Ministers Meeting.

This time I managed to pay a visit to Garuda Wisnu Kencana Cultural Park in Bali and see the 122-metre tall Garuda Wisnu Kencana statue. The statue, I learnt, was inspired by Garuda’s search for amrit. Legend has it that Garuda agreed to be ridden by Vishnu in return for the right to use the elixir to liberate his enslaved mother. I have travelled to a lot places and seen many Garud statues but I had never seen such a towering beautiful piece of work. Nyoman Nuarta, the Indonesian who designed the work, was awarded Padma Shri for his contribution to art and sculpture by the Indian government.

When the G20 Labour and Employment Ministers Meeting was happening against the backdrop of a world limping back to normalcy after the global community suffered an unprecedented crisis when the Covid pandemic brought economic activity to a grinding halt. Nobody had imagined something could stop this fast moving world in its tracks so suddenly. The impact of the crisis was felt universally. The world of works was severely jolted with scores of people losing jobs amid deep economic uncertainty.

Against this backdrop, the Indonesian Presidency selected the most pertinent theme for the Employment Track this year, that is, “Improving the employment conditions to recover together”.

The discussions in this years’ G20 Employment Working Group (EWG) meetings focused on welfare, growth and mainstreaming of disadvantaged and vulnerable groups especially persons with disabilities. There were fruitful deliberations on some important issues related to labour market integration of persons with disabilities, capacity development through Capacity Development Through Strengthening Community Based Vocational Training (CBVT), supporting Small and Medium Enterprises and adapting social protection.

During my bilateral and group meetings, I also highlighted that the Government of India has set up Indian Sign Language Research and Training Centre to promote the empowerment of hearing-impaired persons and to create sign language in India. The institute is continuously preparing sign language dictionaries that have so far included more than 10,000 words.

The Sugamya Bharat Abhiyan (Accessible India Campaign) was launched by the Government in 2015 to provide universal accessibility to persons with disabilities so that they can live a meaningful life with dignity. The Government is also implementing a unique Disability Identity Card project with the objective of creating a National Database for Persons with Disabilities. So far, over 6.4 million UDID cards have been prepared in 713 districts of all states/UTs in the country.

In the area of Sustainable Growth and Productivity in Human Capacity Development Through Strengthening Community Based Vocational Training (CBVT), I apprised the delegates that Under the Skill India Mission launched by the Hon’ble Prime Minister of India in 2015, the Government is delivering skills through Pradhan Mantri Kaushal Vikas Yojana (PMKVY) with an objective to impart skill development training and certification to youth and to make them employable for better livelihoods across the country. Presently, the third phase of the PMKVY Scheme is being implemented across the country and since inception, more than 13.4 million candidates have benefited from the scheme.

India also acknowledges the immense potential of CBVT in addressing the training needs of rural populations and disadvantaged groups. In this regard, the RSETI (Rural Self Employment Training Institutes) programme has been launched by the Government of India to turn rural poor youth into profitable entrepreneurs by training them in domain and entrepreneurial skills. Since inception, more than 4.1 million youth has been trained under the scheme.

The other priority area for discussions was Promoting Entrepreneurship and Supporting SME as a Job Creation Instrument. India has always understood the role Micro- small- medium-sized enterprises (MSMEs) play in the global economy, particularly in developing countries. India believes improving the productivity and formalisation of MSMEs can lead to more resilient jobs for the workers on one hand, and serve as a growth driver for the economy on the other.

Recognising that Startups and the entire technology ecosystem are engines of growth for any country, the Government launched Startup India initiative in 2016 with an aim to build a stronger ecosystem for nurturing India’s start-up culture. This has contributed to economic growth, supported entrepreneurship, and enabled large-scale employment opportunities in the country.

The deliberations also focused on Adapting Labour Protection for More Effective Protection and Increased Resilience for All Workers. I shared with fellow delegates that rapid advancements in technology have led to emergence of new forms of work, including gig and platform work. Recognising the unique set of challenges with regards to providing social security to gig and platform workers, the Government of India has recently introduced Code on Social Security, 2020.

In sync with the ever evolving nature of the world of work, the Code has provided a definition for platform work/workers. The Code also provides for setting up of a “Social Security Fund” for 400 million informal workers along with Gig and platform workers and will help in providing Universal Social Security coverage.

The delegates held the discussion in a healthy environment focused on learning from each other’s best practices. I thanked the Indonesian Presidency for successfully organizing the two day G20 Labour & Employment Ministers’ Meeting and applauded all G20 partner nations and guest nations for their affirmative inputs and constructive interventions.

I congratulated the Indonesian Presidency, ILO and OECD for taking the initiative to update the G20 Skills Strategy, which was formulated in 2015. I also extended an invitation to the delegates to visit India during the upcoming G20 Presidency.