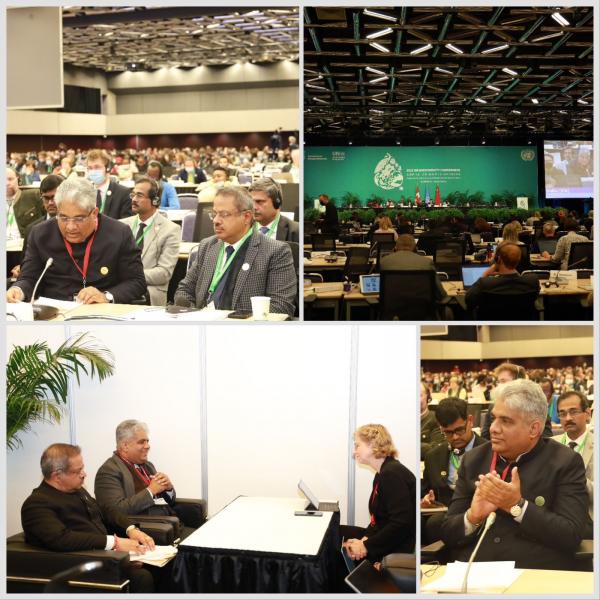 As part of my engagements at the UN Biodiversity Conference, COP15 in Montreal, Canada today, I addressed the stocktaking plenary. On behalf of India, I acknowledged the contribution of the parties towards biodiversity conservation and expressed hope that COP15 will reach a consensus on putting in place the post-2020 Global Biodiversity Framework.

Speaking at the plenary, I stated that reversing ecosystem degradation and halting global biodiversity loss are essential for the socioeconomic development and wellbeing of people, and for advancing global sustainability.

India, under the leadership of Honourable Prime Minister Narendra Modi is working towards restoring and conserving its rich biodiversity, which includes one of the world’s richest mix of flora and fauna. India is also working closely with other countries for knowledge sharing and technology exchange for biodiversity conservation.

Speaking at the plenary, I underlined India’s position that while the goals and targets set in the Global Biodiversity Framework should be ambitious, they should also be realistic and practical. Conservation of biodiversity must also be based on Common but Differentiated Responsibilities and Respective capabilities as the climate change also has an impact on biodiversity.

I reiterated that for the developing nations, agriculture is a paramount economic driver for rural communities, and the critical support provided to these sectors cannot be redirected.Majority of the rural population in India is dependent on agriculture and allied sectors and Honourable PM Modi ji’sgovernment provides a variety of subsidies, including seed, fertilizer, irrigation, power, export, credit, agriculture equipment, agriculture infrastructure for supporting the livelihoods of farmers mainly, small and marginal.

Hence, India does not agree to reducing the agriculture related subsidy and redirecting the savings for biodiversity conservation, as there are many other national priorities.

When food security is of utmost importance for developing countries, prescribing numerical targets in pesticide reductions is unnecessary and must be left to countries to decide, based on national circumstances, priorities and capabilities.

Biodiversity conservation requires ecosystems to be conserved and restored holistically and in an integrated manner. It is in this context that Ecosystem Approaches for conservation of biodiversity need to be adopted rather than going for nature-based solutions. The developing countries bear most of the burden of implementing the agreement, but the benefits are global. Similarly, the availability of new technologies and biodiversity data is still uneven. Most of the megadiverse countries that harbour global biodiversity need adequate funds, coupled with technology transfer.

I stated that against this background the most important challenge is the resources needed for implementation of the Global Biodiversity Framework. Greater ambition means greater cost and the burden of this cost fall disproportionatelyon the countries that can least afford them.

The successful implementation of the framework will squarely depend on the ways and means we put in place for an equally ambitious Resource Mobilization Mechanism. There is a need to create a new and dedicated mechanism for the provision of financial resources to developing-country Parties.

I underlined the need for operationalising such a fund at the earliest to ensure effective implementation of the Post Global Biodiversity Framework by all countries.

I once again said that India is fully committed to working closely with all parties so that we are all able to bring out an ambitious and realistic Global Biodiversity Framework in COP15.