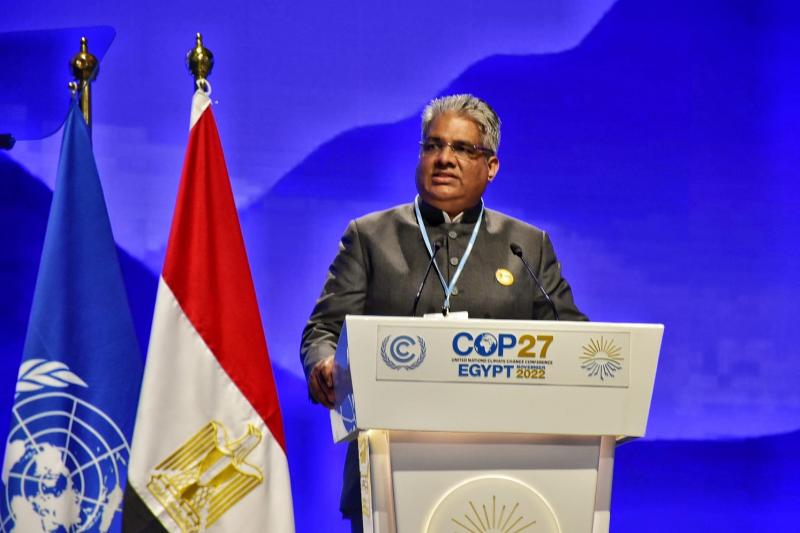 At the Conference of Parties today at Sharm El-Sheikh, I took forward work by presenting India’s National Statement.

I began by thanking Egypt for their efforts in organising COP27 and gracious hospitality. Taking the conversation further, I outlined the work India has done since COP26 in Glasgow in 2021. At Glasgow, I said, India responded to the call of science and came forward with important pledges and commitments.

Responding to the call for increased ambition in our 2030 climate targets, India updated its Nationally Determined Contributions in August 2022. India embarked on far-reaching new initiatives in renewable energy, e-mobility, ethanol blended fuels, and green hydrogen as an alternative energy source.

I stated that India seeks to foster strong international cooperation through action and solutions-oriented coalitions like International Solar Alliance and Coalition of Disaster Resilience Infrastructure, both of which were launched and nurtured by India.

This is a testimony of India’s ethos of collective action for global good.

India, home to 1.3 billion people, is undertaking this arduous effort, despite the reality that its contribution to the world’s cumulative emissions so far is less than 4 per cent and our annual per capita emissions are about one-third of the global average.

At the heart of India’s vision of a safe planet is a one-word Mantra – Lifestyle for Environment, which Prime Minister Modi set forth in our National Statement at COP26. Mission LiFE was launched by Hon’ble PM Modi in the presence of the UN Secretary General His Excellency Antonio Guterres, on 20th October 2022.

The world urgently needs a paradigm shift from mindless and destructive consumption to mindful and deliberate utilization. We are trustees of this planet earth. We must nurture it through sustainable lifestyles that optimize resource use and minimize waste.

As the world’s most populous democracy and a vibrant emerging economy, India seeks to lead by example, and invites the global community to be a part of Mission LiFE for individual, family and community-based actions.

Presenting India’s National Statement, I stated that India is assuming the Presidency of the G20 in 2023 with the motto of ‘One earth, One family, One future’. Our journey towards a planet safe for humanity is one that no nation can undertake alone. This is a collective journey to be undertaken with equity and climate justice as our guiding principles.

I expressed hope that the fight against climate change will unite the world as one family.