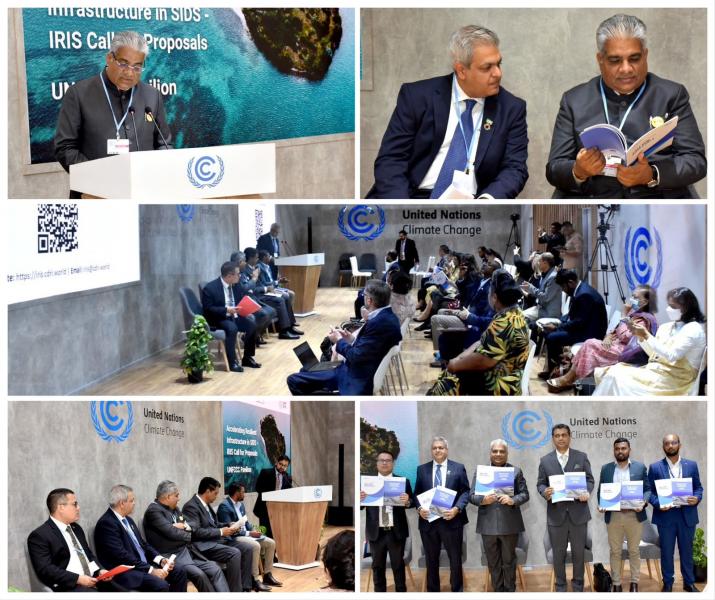 COP27: India reiterates leave ‘no one behind and alone’

Even as COP27 is nearing its closure, India has taken on the G20 Presidency based on the theme of “One Earth, One Family, One Future”. Hon’ble Prime Minister Shri Narendra Modi has promised the Presidency will be “inclusive, ambitious, decisive, and action-oriented”.

Taking over the Presidency from Indonesia in Bali, the Hon’ble PM aptly pointed out that the “sense of ownership over natural resources” is creating a conflict and is the main cause of the plight of the environment. He said that a sense of trusteeship is the solution for the planet’s safe future and India’s LiFE or ‘Lifestyle for Environment’ can make a contribution in this context. India, under Shri Modi, has believed that the world must come together to fight climate change and that “no one should be left behind”.

As part of my engagements today at the 27th Conference of Parties, I addressed a session n Accelerating Resilient Infrastructure in Small Island Developing States (SIDS) at the UNFCCC Pavilion where I presented the vision of ‘Infrastructure for Resilient Island States’ (IRIS) to a global audience and announced the first ‘Call of Proposals’ for the roll out of projects under IRIS.

SIDS are islands of the Caribbean Sea and the Atlantic, Indian and Pacific Oceans.

IRIS is a flagship strategic initiative that has been designed as an instrument to achieve and deliver resilience and climate adaptation solutions to the Small Island Developing States (SIDS), which are among the most vulnerable and exposed countries. The aim is to ensure that no nation is left alone in dealing with the vagaries of global warming.

IRIS has been co-created by the Coalition for Disaster Resilient Infrastructure (CDRI), which was launched by Hon’ble Prime Minister Shri Narendr Modi with support from Member Countries and organisations and Small Island Developing States (SIDS) representatives. It was launched at the World Leaders Summit at COP26 by India, UK, Australia, Jamaica, Mauritius and Fiji.

IRIS aims to support SIDS in achieving sustainable development through a systematic approach to resilient, sustainable, and inclusive infrastructure. It is a joint platform to facilitate cross-learning, sharing and engagement on solutions to infrastructure resilience in SIDS.

The SIDS were recognised as a distinct group of developing countries in June 1992 at the UN Conference on Environment and Development because climate change has a very tangible impact on SIDS. Slow onset events such as sea level rise pose an existential threat to small island communities. Given the danger that lurks, these regions require drastic measures such as relocation of populations, and their relief and rehabilitation. The challenges are compounded by limited institutional capacity, scarce financial resources and a higher vulnerability to natural disasters.

The aggregate population of all the SIDS is 65 million, slightly less than 1 per cent of the world’s population. But this group faces unique social, economic, and environmental challenges.

Speaking at today’s event, I emphasised that the Government of India, under the leadership of Hon’ble PM Modi, stands firmly committed to safeguarding the interests of SIDS in a changing climatic regime.

I underlined that India is committed to both domestic action and multilateral cooperation on climate change. We will continue to fight all global environmental concerns in the call to protect humanity’s planetary home. But global warming also warns us that equity and international cooperation and the commitment to leave no one behind, hold the key to success, where those most fortunate must lead the way. No nation can undertake this journey alone. Right understanding, right thought and co-operative action need to set our path for the next decisive half a century.

At the event I reiterated that IPCC’s AR6 Reports tell us clearly that the responsibility for warming is directly proportional to the contribution to cumulative emissions of CO2. All CO2 emissions, whenever they take place, contribute equally to warming.

IPCC Reports and all other best available science also show that India is among the nations facing high vulnerability to climate change. So, we are very sympathetic to the situation of the island states and others. India, with an over 7,500-km-long coastline and more than 1,000 islands in the surrounding seas, and a large coastal population dependent on the sea for lives and livelihoods, is also a highly vulnerable nation on the global scale. Just to give an example, between 1995 and 2020, India recorded 1,058 climatic disaster events.

Considering per capita emissions, for an objective scale for comparison, India’s emissions are, even today, about one-third of the global average. If the entire world were to emit at the same per capita level as India, the best available science tells that there would be no climate crisis.

I underlined that through IRIS, India is putting to action its belief in Vasudeva Kutumbakam – the world is one family- and showing its commitment to address climate change with partners to make a better and safer planet for all.

I reminded the gathering about what our Hon’ble Prime Minister had said, “CDRI or IRIS is not just a matter of infrastructure, but it is part of the most sensitive responsibility of human welfare. It is the collective responsibility of all of us towards mankind. It is, in a way, a common atonement for our sins.”

CDRI was launched by the Hon’ble Prime Minister of India during the United Nations Climate Action Summit on the 23rd September, 2019, in New York. It is the second major global initiative launched by the Government of India, after International Solar Alliance (ISA), and is a demonstration of India’s leadership role in climate change and disaster resilience matters, globally.

CDRI is a global partnership of National Governments, UN agencies and programmes, multilateral development banks and financing mechanisms, the private sector, academic and knowledge institutions that aims to promote the resilience of infrastructure systems to climate and disaster risks, thereby ensuring sustainable development.

On June 29, 2022, the Union Cabinet chaired by the PM ShriModi approved the categorisation of the Coalition for Disaster Resilient Infrastructure (CDRI) as an ‘International Organization’ and signing of the Headquarters Agreement (HQA) with CDRI for granting it the exemptions, immunities and privileges as contemplated under the United Nations (Privileges & Immunities) Act, 1947.

Categorization of CDRI as an ‘International Organisation’ and signing of HQA with CDRI for grant of exemptions, immunities and privileges as contemplated under Section-3 of the United Nations (Privileges & Immunities) Act, 1947 provides CDRI an independent and international legal persona to efficiently and effectively carry out its functions internationally.

As part of my other engagements, I continued to handle the responsibility of the co-lead in Ministerial Consultations on key outstanding issues for Climate Finance.