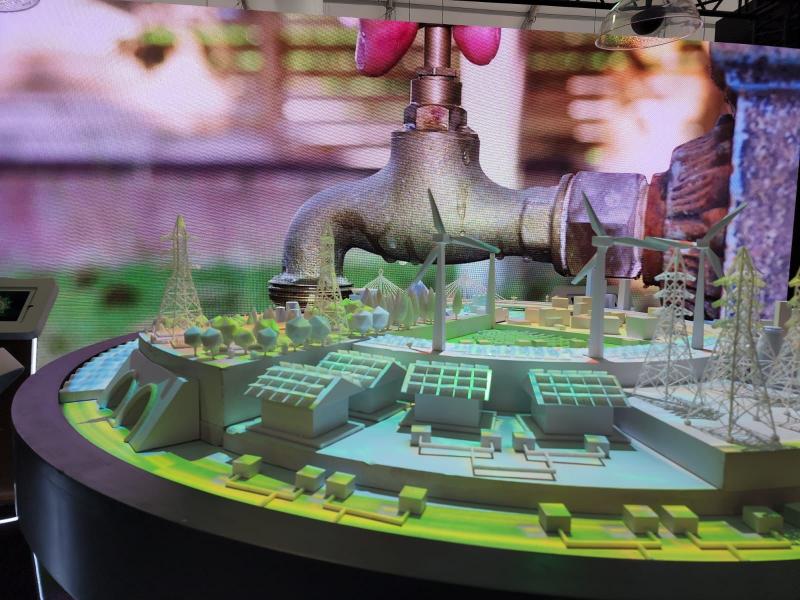 Negotiations and discussions at the 27th Conference of Parties in Egypt are going on in full swing.

I am currently handling the responsibility of the co-lead in Ministerial Consultations on key outstanding issues for Climate Finance. Since the subject is sensitive I am witness to intense negotiations on the issue.

Apart from co-chairing the Ministerial Consultations, I also participated in the Like-Minded Developing Countries(LMDC) Meeting on the sidelines of COP27. Hon’ble Prime Minister Shri Narendra Modi has always laid emphasis on multilateral cooperation to meet goals.

Addressing the LMDC event, as a representative of India, I highlighted that COP27 has entered a crucial phase of negotiations during and there still remain many unresolved issues that need to be addressed, including the Mitigation Work Program, Second Periodic Review, Global Goal on Adaptation and Loss and Damage. India has worked with the LMDC group in furthering the common agenda on above items.

The Presidency, with the consent from other parties, requested the co-facilitators to continue to lead discussions.

The progress on key issues, however, has not been good due to the divergence of views on some fundamental approaches to the climate issues.

I underlined the need to reiterate the principles of equity and Common but Differentiated Responsibilities and Respective Capabilities. There is a distinct attempt to forget or overlook this principle with attempts to emphasise that Paris Agreement does not need to adhere to principles of the convention. I stated India’s position that this should not be allowed.

Historical contribution and responsibilities of developed nations cannot be overlooked.

Reflection of gaps in pre-2020 ambition in the cover decision is paramount as this has led to the unjust transfer of mitigation burden to developing countries in the post-2020 period.

Pursuing efforts to keep global temperature increase to 1.5 degrees will require significantly scaled up and accelerated mobilisation of climate finance from developed countries that have used up a disproportionate share of the global carbon budget.

I said that there is need to recognise gaps in Means of Implementation (MoI) support including the delay in mobilization of USD 100 billion per annum by 2020. We need strong language regarding technology transfer and support. Green premiums for several new technologies remain high, and we need the cover decision to recognize the Means of Implementation support gaps covering technology as well as finance.

Failure in Means of Implementation support to developing countries is a systemic failure under the Paris Agreement that continues to be a barrier to implementation and further ambition.

Cover decision must reflect adaptation and Loss and damage elements strongly, such as in the need to at least double adaptation finance by developed countries by 2025, providing funding for National Adaptation Plans and funding arrangements for loss and damage.

We cannot support creation of new categories and assignment of enhanced responsibilities based on such categories that have no basis in the convention and the Paris Agreement. (Like the major emitters, top emitters etc)

We cannot support singling out of specific resources or sectors or gases. India received the support of European Union on this aspect.

Despite its many differences, it is encouraging to see that the world realises that the only way to fight climate change is to fight together. And that is why despite the many agreements there is a general commitment towards working together for a sustainable planet.

India has come to COP27 with its own asks and priorities on several front.

India wants developed countries to further enhance climate finance and technology support to achieve the global aspiration of net zero by 2050. The ambitious implementation of climate actions by developing countries is contingent on the ambitious and adequate delivery of climate finance, technology transfer, and other means of implementation and support.

Provision of climate finance, investment, research & development, innovation and technology transfer would be the critical enablers for climate action without which meaningful pathways to low carbon development will not be realised.

On every major climate negotiation platform, India has been continuously highlighting two major concerns which are technology and climate finance. India wishes to contribute to a just and ambitious climate deal that is based on equitable growth and right to development, as well as post-2020 support for means of implementation including long term finance to ensure that all the commitments of countries are delivered to achieve the long terms goals of the Paris Agreement.

The key issues India is highlighting at COP27 are:

Finance: COP27 should assess achievement of climate finance commitments and further efforts to bridge gaps of previous years. There is an urgent need to make progress in setting long-term climate finance goals.

Mitigation Work Programme (MWP): MWP should not become a vehicle for developed countries to impose further obligations on developing countries to increase their ambition, which undermine the nationally determined character of NDCs. MWP cannot be mitigation-centric, as the issue of scaling up ambition on mitigation is linked to the means of implementation for developing countries.

Adaptation: COP27 should be “Adaptation COP” – key deliverables and outcomes on Glasgow Work Program on Global Goal On Adaptation (GGA) firmed up with clear pathways for means of implementation and support for adaptation action.

Loss & Damage: Glasgow Dialogue should address the financing mechanism for Loss and Damage; cover new and additional finance for Loss and Damage; and urgent implementation of actions covering needs of the parties. There should be progress on operationalisation of Santiago Network and its institutional structure. Role of Warsaw International Mechanism (WIM) and terms of reference of governance must be decided.

CBDR-RC: The principles and values of Equity and common but differentiated responsibilities and respective capacities (CBDR-RC) for climate action must be ensured in all outcome of COP27.

Energy transition must be underpinned on ensuring access, affordability and support goals of energy justice. Energy transition must therefore not only be just and orderly but also ensure that weaker sections of society are safeguarded. Energy must be available, accessible and affordable for all across the globe.

A just transition would be an orderly transition, respecting the time required for the different steps and in accordance with the nationally defined development priorities. Weaning away from non-renewables would only follow the delivery of affordable renewable energy.

Technical and specific commitments in terms of Gigawatts of renewable energy, required finance, and technology should be made and equally importantly supply of raw materials should be assured.

Skilling, up-skilling and re-skilling of those in the traditional sectors should be done so as to enable them to transition towards the new and renewable energy sectors or other green sectors of the economy.

India has also set targets to address energy-related carbon emissions outside of the electric power sector, such as in:

India has set a target of

India wants to increase use of natural gas in the energy mix to 15% through its National Hydrogen Mission and through the international Leadership Group for Industry Transition (LeadIT).

India is also actively engaged with EU led multilateral Mission Innovation and participates in all global calls to action or Challenges aimed at accelerating Research, Development, and Demonstration (RD&D) for Clean Energy Development.

India expects developed countries to provide climate finance of $1 trillion at the earliest.

Mobilization of credible, adequate, predictable, timely, new and additional from climate finance and investments from multiple sources is necessary for a just energy transition. Public finance to play crucial role for mobilizing and leveraging private capital.

There needs to be an adequate element of “concessionality” and sharing in the financial proposals which must be specified and committed to by the G7 and partners.

Scaling up of finance with more widespread use of “blended” finance.

India is for promotion of investments from partner countries and including multilateral and other public development banks; the private sector in the incubation, demonstration and integration technologies. The world needs to ensure sustainability of livelihoods and well-being of dependant people and community impacted by such transition. Resilient & stable supply chains are integral for achieving energy justice in India. There is a need to implement joint green hydrogen projects, finding markets for green hydrogen and green ammonia as well as address challenges in technology (including issues related to storage and transport) and financing.

Issues such as energy poverty, balanced economic development and community rehabilitation, new employment opportunities and skill development in the green sectors including in coal mine areas, health and all other sustainable development goals (SDGs) of the Agenda 2030, will be taken into account.

Protection of  jobs during the transition process by promoting skilling, up-skilling and re-skilling of those in the traditional sectors so as to enable them to transition towards the new and renewable energy sectors or other green sectors of the economy.

A Skilling Fund may also be set up with the financial contributions from G7 countries and India. There is a need for developing a comprehensive mine closure framework on the three principles of physical reclamation, environmental remediation and taking care of society/community.

We need to take up mine closure in closed/ abandoned mines or mines closing due to exhaustion of reserves, viability/safety issues with people centric approach ensuring sustenance of livelihood of affected people and sustenance of social infrastructures like hospitals, schools, community buildings, roads etc.

Proposed JETP in Indian coal sector to be aligned with Ministry of Coal’s on-going engagement with World Bank.

India firmly believes Technology Transfer must complement climate finance. Without access to the relevant technologies, a transition to low carbon pathway is infeasible. India can provide scale and scope with due care and safeguards for commercial application of advanced technology for improving the performance, value addition and increase exportability of relevant products around the world.

There should be technical and financial cooperation, provision of technology and know-how that would increase efficiency, resilience, reliability and flexibility of energy production, storage and consumption.

There should be a recognition that thermal power generation may continue during a transition period to ensure dependable electricity supply, India’s energy transition will entail accelerating the deployment of renewable energy; using renewable energy across the economy including in the electric power and end-use sectors (industry, transportation, buildings, etc.); moving towards a gas based economy with gas as an intermediate fuel, increased use of alternative sources of energy; and increasing energy efficiency across the economy.

The energy transition will also include following a low-carbon pathway and modernising the existing thermal power plant fleet, while ensuring energy security and system reliability.

India believes modernisation of power grids is important forlowering of carbon footprint. There is a need to create flexibilization of thermal power plants. There is a need for deployment of energy storage.

Offshore wind generation and integration with grid is in line with India’s priorities. There is a need to advance solar thermal technologies. Switch to green hydrogen can be made only gradually, only if, found viable in the long run. There is a need to develop Green energy corridors & integration with the grid. We look to ramping up Green Ammonia production and use and shifting towards low carbon intensity bridge fuels like natural gas and use of alternate sources of energy like bio-fuels and Compressed Bio Gas (CBG).

Sustainable and affordable bio-fuels, including (CBG) for transport sector, are a must.

India wants Carbon Capture and Utilisation (CCU) and sequestration, advanced materials and biotechnology tools to develop new sources for renewable energy. Creating low carbon steel, cement and concrete and such other materials.Focus on technologies & R&D that permit the use of cleaner coal to support India’s clean energy transition.