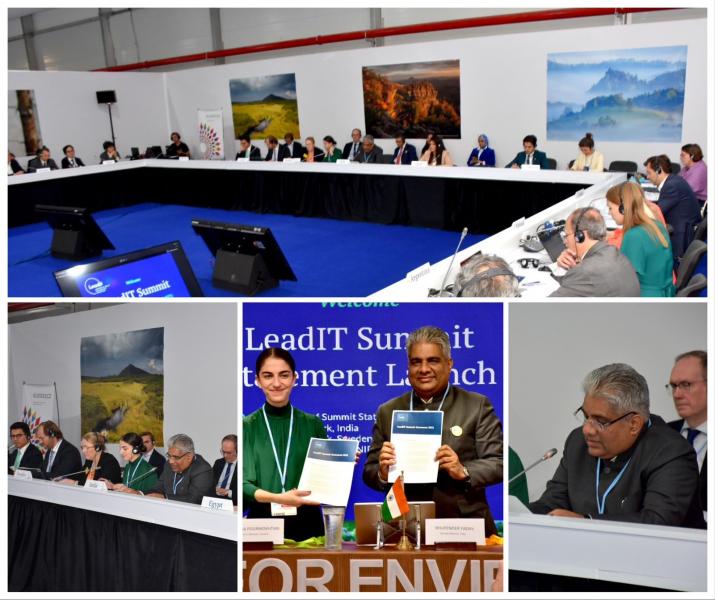 After putting forth India’s National Statement on the sidelinesof COP27 at Sharm el-Sheikh, participated in LeadIT Summit, an annual event India co-chairs along with Sweden, since the start of this important initiative in 2019 at the behest of Hon’ble Prime Minister Shri Narendra Modi, to set the agenda for global conversation on industry transition. Minister for Climate and the Environment, Sweden, Ms RominaPourmokhtari and the Minister for International Cooperation, Egypt, Ms Raina Al-Mashat participated in the event.

The LeadIT (Leadership for Industry Transition) initiative focuses on low-carbon transition of the hard to abate industrial sector. The Leadership Group for Industry Transition (LeadIT) gathers countries and companies that are committed to action to achieve the Paris Agreement. It was launched by the governments of Sweden and India at the UN Climate Action Summit in September 2019 and is supported by the World Economic Forum. LeadIT members subscribe to the notion that energy-intensive industry can and must progress on low-carbon pathways, aiming to achieve net-zero carbon emissions.

In my opening address, I spoke about the activities of LeadITwith a special focus on the road mapping exercise that was undertaken for the cement and steel sector in India. Imentioned that going forward, similar exercises are expected to be taken up in other member countries of LeadIT. I also emphasised that co-development is the only option to meet the targets that the world has taken for itself and without it, low carbon transition could be delayed by decades.

Addressing the event, I said that the low carbon transition of the industrial sector will not only contribute towards the reduction in required greenhouse gas emissions. It has several co-benefits that include increasing resilience to changes in climate, enhanced energy security, innovation, socio-economic development and job creation.

Further, I underlined that roadmaps can be an important tool to carve out the transitions and develop strategies for identified roadblocks. The roadmapping exercise under LeadIT was initiated in India for the cement and steel sector with an active engagement of the respective stakeholders of the sector. The activity has led to the identification of country-specific requirements and recommendations.

One of the important levers for low carbon transition of the industries is circularity. The focus needs to shift away from virgin material to reusing & recycle for closing the loop of material lifecycle.

The implementation of the roadmaps and the required low carbon transitions will require financial resources at scale. The investments in the transition process need to be de-risked through innovative mechanisms from development banks, climate funds, multilateral and bilateral cooperations.

I added that in the coming year, some of the LeadIT members countries, i.e. India, Sweden and Japan shall be presiding over G20, Council of European Union and G7. Therefore, accelerated industry transition will be one of the key focus areas.

The LeadIT Group has expanded its membership to 37 countries and companies together so far. The objective is to specifically help emerging and developing economies or companies with decarbonisation commitment from the industry sector, to be part of the transition. On this platform, we welcome the countries and companies with strong ambitions for industrial transitions to reach out to the LeadITsecretariat and consider joining the initiative.

The event included roundtable discussions that focussed on finance and other cross-sectoral issues. The LeadIT members,including countries and companies, shared their initiatives in the industry sector and views on the requirements for successful low-carbon transitions.

The summit concluded with the adoption of the summit statement by the members of LeadIT which re-emphasized the commitment to continue pursuing the low-carbon transition of the industry. The members also committed to providing technical assistance to new members and emerging economies. The importance of de-risking investments in the transition of heavy industries in emerging and developing countries was also highlighted.

The summit was followed by the public launch of the LeadITSummit Statement 2022 in the India Pavilion at COP27. The public launch witnessed a wide participation including from government representatives, industry, media and civil society.

Earlier in the day I met with Ms Inger Andersen, Executive Director of UNEP on the sidelines of COP27 in Egypt. We held constructive talks on biodiversity conservation, and India’s G20 Presidency. We also discussed circular economy and blue economy and how every country can put forward their best practices together in nature conservation to further the message of LiFE. Ms Andersen was very supportive of Mission LiFE.

Another bilateral I held was with Netherlands Minister for Climate and Energy Policy Mr Rob Jetten. We discussed how India and Netherlands are working to save deltas and coastal zones and how the two countries have huge opportunities to share knowledge and expertise in different sectors particularly green energy.

Later in the day, I spoke on Climate Smart Urban Development: An ecosystem-based adaption approach for enhancing climate resilience in India.

Addressing the event, I said the COVID-19 pandemic has shown the human race that respect for nature is not just a moral or ethical consideration but it is an imperative for keeping ourselves, our health and our economies safe. It is crucial for leaving a lasting legacy for our future generations.

As we enter the Amrit Kaal in our country’s development growth in coming decades, India’s urban transformation remains at the heart of this journey.  This transformation is unique as it will come at the time when the impact of as well as the global momentum to respond to climate change will heighten.

India’s urban transformation will, therefore, have deep implications for not only local welfare and environmental conditions but climate mitigation and climate adaptation as well. India has a unique opportunity to lock in low carbon resilient and equitable urban forms for the long term.

In this, developing healthy and green cities to build climate resilience and impact life to sustain a healthy environment becomes very important.

As part of the event launched The Nature Conservancy India’s reports on:

The reports will be a small step towards the right direction and will be beneficial in the long term planning for people and society.

Speaking at the event I stated that India is blessed with a rich natural and cultural heritage. Despite having only 2.4% of the world’s land area, we have around 8% of the recorded species, making India a mega-biodiverse country.

Despite supporting a large population, we have nearly a quarter of the country’s area designated as recorded forest area. Nearly a sixth is set aside for meeting biodiversity goals.As we talk about Climate Smart Urban Development, combatting desertification comes as an another important challenge. I shared with the gathering that the Government of India under the visionary leadership of Hon’ble Prime Minister Shri Narendra Modi has announced the restoration of26 million hectares of degraded land by 2030.

I also mentioned that while we discuss the ecosystem based adoption approach in making our cities climate resilient, water bodies like rivers and wetlands play a significant role in it. In March this year, the Government of India aunched the program to rejuvenate 13 major rivers through forestry interventions. This intervention is expected to increase the forest cover by 7,400 square kilometres across 13 riverscapes.

Recognising the importance of wetlands, our Hon’ble PM announced the Jal Shakti Mission couple of years back and has recently announced the Amrit Sarovar project which calls for the creation of 75 Amrit sarovars initiative under which, in each district, 75 waterbodies will be restored and rejuvenated to address local water security needs.

Also mentioned that we need to promote better linkages between science, policy, and implementers with a people focused approach. I congratulated The Nature Conservancy once again for release of the report and expressed hope that we all work together towards an ecosystem-based approach for enhancing climate resilience.