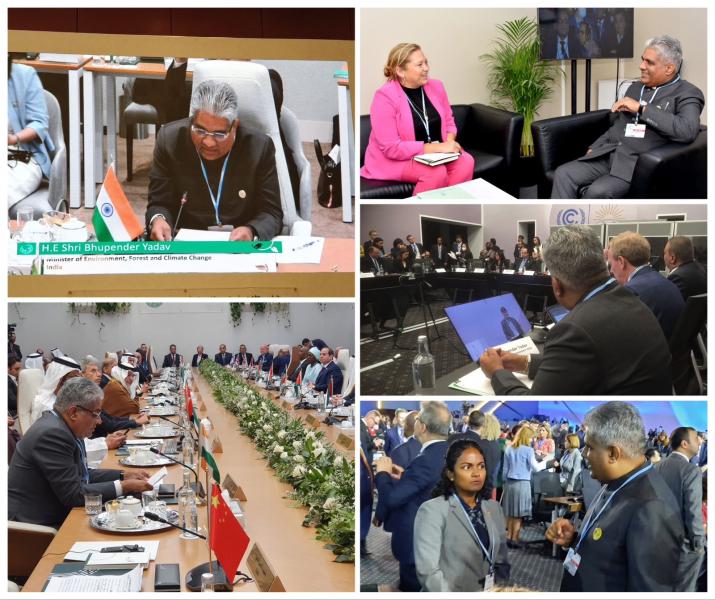 With a significant move to adopt the agenda item on “Matters relating to funding arrangements responding to loss and damage associated with the adverse effects of climate change, including a focus on addressing loss and damage” yesterday during COP27 at Sharm El-Sheikh in Egypt yesterday, the day today began with the World Leader Summit where UN Secretary-General António Guterres raised the pitch for action and implementation.

The Secretary-General also called for a climate solidarity pact between developed and emerging economies. India has always supported the need for closer cooperation between members of the global community and is working on strengthening ties and forging new ones for greater cooperation towards climate action.

As part of my engagements at COP27, I attended UN Secretary-General High-Level Round Table to launch the Early Warnings for All Executive Action Plan. I extended support on India’s behalf to the initiative as the global pace of climate mitigation is not enough to contain the rate of climate change. Geographically, India lies between the Tropic of Cancer and Tropic of Capricorn, the region where most vulnerable countries fall. Public expenditure and loss of revenue caused by natural disasters have already begun to rise in this region with the least coping capacity.

With climate finance still scarce, climate adaptation in the form of early warning dissemination is key to securing lives, and livelihoods. Early Warnings For All play a part in not just containing the immediate physical impacts, but also mitigating the far-reaching long-term socio-economics implications that follow.

On its part, India has been working in the area under the leadership of Hon’ble Prime Minister Narendra Modi. India has been working on strengthening end-to-end early warning systems for all hydro-meteorological hazards. This has led to concrete results:  We have reduced mortality from cyclones by up to 90% over the last 15 years. On both east and west coasts, we have nearly 100% coverage of early warning systems for cyclones. Similarly, for other hazards – such as heat waves – we are making swift progress, leading to much greater resilience of our communities.

The Cyclone Warning Division at IMD, New Delhi, also acts as a multilateral Regional Specialised Meteorological Centre for monitoring, predicting and issuing warning services on tropical cyclones developing over the north Indian Ocean, along with 13 countries in Bay of Bengal and Arabian Sea region.

I also underlined that India is now moving to maximise the full potential of Early Warning Systems for not just reducing the loss of lives but also livelihoods and national development gains. India has spearheaded the Coalition for Disaster Resilient Infrastructure (CDRI) which is working towards developing applications of climate forecast and early warning for reducing infrastructure losses and disruption in basic services.

Following the High-Level Round Table, I attended the Middle East Green Initiative Summit 2022. Addressing the event, I stated that India is committed towards building clean and green energy sources and the National Hydrogen Mission is a leap in that direction. Our Hon’ble Prime Minister has been working tirelessly to ensure a swift move to cleaner energy sources and has ensured that with the National Hydrogen Mission, India has moved towards an environment-friendly energy source.

As part of the United Nations Decade of Action for attainment of SDGs, India has initiated several measures for promoting Resource Efficiency and Circular Economy, including for prevention and management of waste.

I also reiterated that India has also initiated a number of coalitions such as the International Solar Alliance, which is part of Hon’ble PM’s vision to bring clean and affordable energy within reach of all.

I also mentioned that India has also initiated Leadership group in Industry transition (Lead IT) track along with Sweden with focus on hard to abate industrial sectors; and Coalition for Disaster Resilient Infrastructure for easy and faster mobilization of technology, finance and necessary information for Small Island Developing States.

I also extended an invitation to the delegates to join these coalitions to achieve the goals related to climate change.

It was heartening to see the world paying attention to how India given its population size is managing to achieve such encouraging results and also showing the way to the global community.