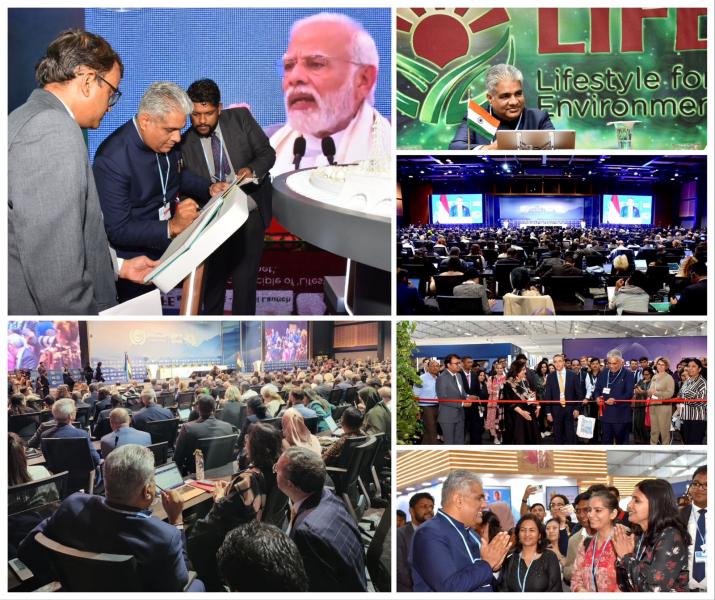 COP27 begins with inclusion of Loss and Damage on agenda

The Conference of the Parties of the United Nations Framework Convention on Climate Change (UNFCCC), COP27, started today at Sharm El-Sheikh in Egypt. With the start of COP, the largest annual gathering on climate action,the Presidency has passed on from the United Kingdom to Egypt.

The outgoing COP President Alok Sharma formally passed on the Presidency to HE Sameh Shoukry. India appreciates the efforts put in by the UK during their Presidency and wishes that Egypt takes the efforts to combat climate change further with more meaningful outcomes.

India believes COP27, themed ‘Together for Implementation’, should turn out to be the ‘COP for Action’ in terms of climate finance, technology transfer and capacity building.

The scale of the problem facing the world is huge. Action cannot be delayed and hence concrete solutions must come up and implementation must start with COP27. India has come to Sharm El-Sheikh fulfilling its commitments. We are one of the very few countries to have met the climate targets set in Paris in 2015. This year in August, the Union Cabinet in Indiaapproved its updated Nationally Determined Contributions (NDCs) in keeping with the promises made by Hon’ble Prime Minister Shri Narendra Modi at COP26 in Glasgow.

Our country, always working to be part of solutions, has also set up the India Pavilion, which I inaugurated today, on the theme of LiFE, a mantra given to the world by our Hon’blePM to lead Environmentally-friendly Lifestyles.

The India Pavilion has been set up with the aim to serve to remind the delegates from across the world gathered at COP27 that simple sustainable lifestyles changes can help protect Planet Earth.

While a significant part of the world is in urgent need of socio-economic development, we are also confronted with a throw-away society in other parts of the world that indulges inmindless consumerism which is worsening the climate crisis, causing great suffering to the vulnerable sections of the world.

The worsening global crisis of climate change requires us to rethink our development paradigms. Policy changes and innovative technologies alone cannot solve the crisis. India believes that Climate Action starts from the level of the individual and community. The India Pavilion will remind the world that no action is too small in this fight against climate change, every poly bag avoided, every drop of water saved, every product recycled and reused can help us make a big difference.

While India believes and espouses the power of individual action, the country also continues to reiterate that those historically responsible for the climate crisis can no longer shirk responsibility. India is very clear that the world needs amultilaterally agreed definition of climate finance. India doesnot recognise loans to be climate finance because it pushes vulnerable countries further into debts. Our focus at COP27 during our negotiations is thus on concessional and climate-specific grants.

And so India welcomes adoption of agenda item on “Matters relating to funding arrangements responding to loss and damage associated with the adverse effects of climate change, including a focus on addressing loss and damage” at COP27.

For the uninitiated, Loss and Damage refers to the irreversible costs, both economic and non-economic, incurred due toextreme weather events such as hurricanes, heatwaves, drought and wildfires, and also slow climate disasters such as rise in sea-levels and melting glaciers. It is aimed at holding the biggest polluters responsible for the suffering already caused by the climate crisis in addition to securing climate finance for mitigation and adaptation to help developing nations prepare for what can happen in the future.

Financial mechanisms under UN Climate Change Processes, like Global Environment Facility, Green Climate Fund and Adaptation Fund, are under-funded and are not able to mobilise or deliver funds for loss and damage due to climate change.

Accessing funding from these mechanisms is complex and time taking. Adaptation funding is highly inadequate and loss and damage funding has been almost negligible. Taking note of the situation, India along with other countries had been pursuing for adoption of an agenda item on Loss and Damage finance.

With the inclusion of this agenda item, India will be engaging constructively and actively on the subject during the course of discussions at COP27 and hoping that fair negotiations on Loss and Damage follow.

One encouraging sign for India at COP27 was the participation and enthusiasm of the young minds of our country. I felicitated four Young Scholars selected by UNDP and UNICEF for taking climate action. The four are winners of the first cohort of the COP27 Young Scholar Programme launched by the Ministry of Environment, Forest, and Climate Change with the United Nations Development Programme (UNDP) and United Nations Children's Fund (UNICEF) earlier this year.

It is great to see environmentally conscious youngsters who are the real custodians of this planet and true flag-bearers of Mission LiFE.

Tomorrow, I will be speaking at the UN Secretary-General High Level Round Table to Launch the Early Warnings for All Executive Action Plan. Will also address another event on Middle East green initiative.