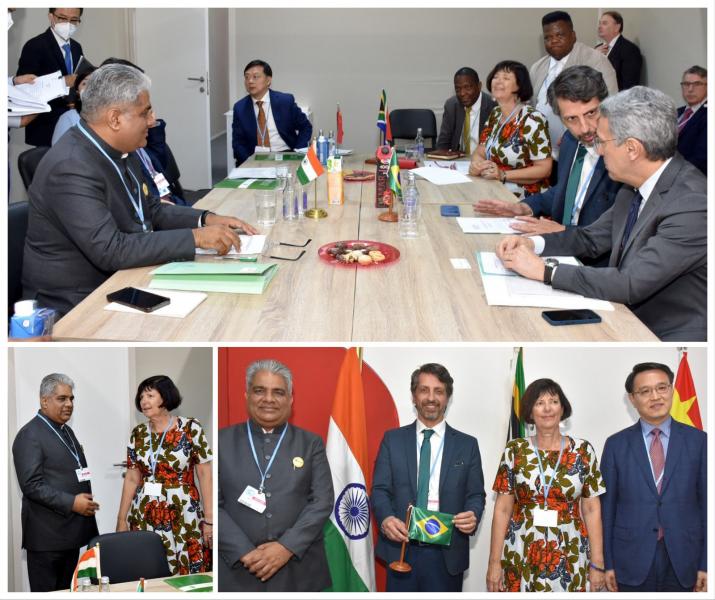 On the sidelines of COP27 in Egypt today, I attended the BASIC Ministerial Meet.

Speaking at the event I stated that this COP has been rightly named the COP of Implementation. BASIC countries have always been for action. Unfortunately, promises, either for 2030 or 2050, have been the dominant narrative that developed countries have sought to establish. At this COP, we have been active in promoting action in key areas of relevance particularly to the majority of the vulnerable populations of the world. Adaptation and loss and damage have been of particular importance to us in this regard.

But the focus is always on mitigation, in one way or the other. I then elaborated on issues related to mitigation briefly and told the gathering that India is submitting its Long-Term Low-Carbon Development Strategy to the UNFCCC.

I explained that India’s low-carbon development strategy details, across seven sectors, all the actions that we are currently pursuing, in order to enable us to achieve our NDC goals by 2030. We have not focused on targets. We recognise that various factors may shift targets, including the development of technology, global economic and geopolitical trends and the extent of international cooperation. There are of course inevitable risks in the long journey to net zero. I expressed hope that focusing on a range of immediate actions enables us to be confident that our way forward will evolve suitably, while taking into account changing circumstances.

I underlined that under Hon’ble PM Shri Narendra Modi, India’s initiatives include the continued expansion of renewables and the strengthening of the grid, rational utilisation of our fossil fuel resources, promoting e-vehicles through major initiatives, steady increase of bio-fuel blending in petrol and diesel, and expansion of energy efficiency across sectors and drawing in more industrial units. Led by the Hon’ble PM, India has a visionary initiative in green hydrogen as the fuel of the future.

I stated that we have already brought many of these initiatives to the stage of implementation. Our annual financial budget this year, for 2022-23 provides a number of examples of the efforts we are making, using our own resources in the absence of climate finance. Recognizing the critical role of solar power, the budget has sharply increased the production linked incentive for domestic integrated solar manufacturing facilities from last year’s allocation of Rs 4500 crore to Rs, 19,500 crore. In a forward looking initiative, energy storage systems, including grid-scale battery systems are to be given infrastructure status.

Our rational utilization of our fossil fuel resources can also be seen in the initiatives in our budget. The first is the introduction of co-firing in all thermal power plants with biomass pellets as fuel, taking forward the current initiatives that are already under way in this respect. The use of biomass pellets in thermal power plants will not only reduce carbon emissions but also provide additional earnings for farmers, animal keeper and help reduce the incidents of stubble burning. The second is the renewed attention to coal, through four pilot plants for coal gasification and the conversion of coal into chemicals for industry that will establish technical and financial viability.

To drive the wide range of the proposed initiatives across the range of environment, sustainability and climate action, the budget announced that government would issue sovereign Green Bonds, as a part of government’s overall market borrowings in 2022-23, for mobilizing resources for green infrastructure. The proceeds are to flow to public sector projects which help in reducing the carbon intensity of the economy. For encouraging important sunrise activity such as climate action, the government is to promote thematic funds for blended finance with the government share being limited to 20 per cent and the funds being managed by private fund managers.

Second, I stated, we must clarify our view of Just Transition. Just transition cannot mean de-carbonization for all countries. For India, just transition means transition to a low-carbon development strategy over a time scale that ensures food and energy security, growth and employment, leaving no one behind in the process. Any partnership with developed countries, in our view, must be based on these considerations.

I stated that at COP27, we must once again impress on our developed country partners that actions are the key and not mere promises. One pledge after another, with several such pledges per COP, are not necessarily fruitful.

A joint statement was issued after the BASIC Ministerial Meeting.

The Ministers pledged their full support to the Egyptian COP27 Presidency for a successful conference, which should deliver an ambitious, equitable and balanced outcome, including substantial progress towards the establishment of a finance mechanism for Loss and Damage, the New Collective Quantified Finance Goal and operationalisation of the Global Goal on Adaptation, as well as completion of the Work Programme on Mitigation. The introduction of a dedicated agenda item on a funding arrangement for Loss and Damage, at the initiative of developing counties, is a welcome development. Above all, COP27 should promote equity and justice by recognizing the fundamental equality of all people and their inalienable human right to pursue economic growth and sustainable development, including the achievement of the SDGs by 2030 and ensuring and enabling just and equitable transition of developing countries.

Ministers highlighted that despite the enormous developmental challenges and pressures of poverty eradication at a time of global economic downturn and economic recovery, the BASIC countries continue to lead from the front on climate change actions, in the context of their overarching sustainable development imperatives. The ambitious nationally determined contributions goals announced by BASIC at COP26 last year are already being implemented, attesting to the sense of urgency and seriousness with which BASIC countries tackle climate change.

The following additional and progressive actions have been taken by India under Honourable Prime Minister ShriNarendra Modi since COP26:

India is now the world’s fifth largest economy and moves forward with a vision of ‘One Earth, One Family, One Future’ to foster stronger international cooperation in tackling shared global challenges like climate change.

India has launched Mission LIFE (Lifestyle for Environment) to create a global mass movement for sustainable lifestyles and a paradigm shift from mindless and destructive consumption to mindful and deliberate utilization. Mission LIFE has a focus on encouraging individual choices and actions that support sustainability and create a world of ‘pro-planet people’.

At COP27 India submitted its Long-Term Low-Carbon Development Strategy towards net-zero by 2070. India also submitted its updated and enhanced NDC in August 2022. India has achieved its initial NDC target in installed power capacity from non-fossil sources, nine years ahead of schedule. India now has the world’s 4th largest installed capacity of renewable energy.

As per the updated NDC, India will reduce the emissions intensity of its GDP by 45 per cent by 2030 from 2005 levels and achieve about 50 per cent cumulative electric power installed capacity from non-fossil sources by 2030. India is addressing energy-related carbon emissions in its growing transport sector and aims at enhanced electric passenger vehicle sales by 2030; 20% ethanol blending in petrol by 2025; and rapid progress towards 100% rail electrification and net-zero railways.