On the sidelines of the COP26 Summit in Glasgow today, I received the opportunity to co-chair the first hybrid Leadership Group for Industry Transition (LeadIT) Summit along with Mr Per Bolund, Spokesman for the Green Party and Minister of the Environment and Climate and Deputy Prime Minister. The LeadIT Summits held earlier were all organised virtually due to the Covid-19 pandemic.

LeadIT, as is well known, is a voluntary initiative aimed at promoting low-carbon transition especially in the hard-to-abate sectors such as iron and steel, aluminum, cement and concrete, petrochemicals, fertilisers, bricks, heavy-duty transport, among others. The joining of the US, Austria and Ethiopia, spreading across three continents, has given a further boost to the group. I welcomed the three countries to LeadIT.

Though voluntary, the group has seen an active participation of the private sector companies.

In 2021, three companies Skanska, HeidelbergCement and Salzgitter have joined the initiative. At today’s meeting, I underlined that it is necessary that more private companies from the heavy industries should join this global initiative. Any roadmap for voluntary industry transition under the LeadIT may be privately driven but will have to take into account national circumstances and priorities, level of development, level of technology, and cost of transition.

It is estimated that industry sectors together contributes around 30 per cent of the total global CO2 emissions. Thus, efforts to drive low carbon development pathways in industry sector are critical for achieving the goals of the Paris Agreement.

Any low-carbon production in the heavy industry requires intervention at both at the level of alternative feed stocks as well as efforts to reduce process-related emissions. This is challenging in developing countries that are yet to build capacities for such endeavours.

The sectoral transitions particularly in hard-to-abate sectors could be achieved only when developing countries are provided implementation support as per the obligations of the United Nations Framework Convention on Climate Change and the Paris Agreement.

The worlds needs to scale-up of cutting-edge technologies such as green hydrogen and fuel cells, clean energy storage, carbon capture and use and storage (CCU and CCS), and e-mobility, among others.

But demand-side interventions to make the business case for low carbon industrial products will make sense only when countries promote low carbon sustainable lifestyle practices amongst citizens as well as promote it through a set of facilitating policies.

To facilitate work on these aspects it was appreciable on part of the LeadIT Secretariat for engaging in extensive consultations among the Members to finalise the Summit Statement.

s this Summit coincides with the COP 26 of the UNFCCC, a special mention of the Intergovernmental Panel on Climate Change (IPCC) Working Group 1 contribution to the Sixth Assessment Report “Climate Change 2021: The Physical Science” is made in the Summit Statement.

The statement was adopted on the sidelines of COP26.

At today’s meeting, I urged all member countries of LeadIT to work towards implementing the LeadIT Statement and also requested countries and companies, which have not joined LeadIT Group, to consider joining this group. 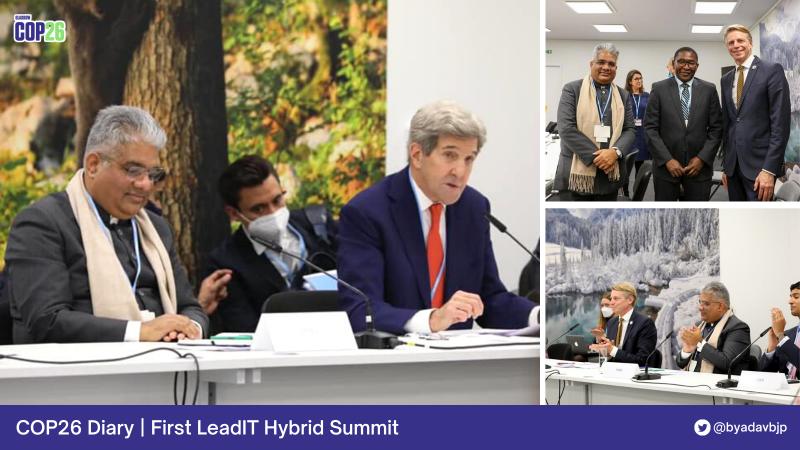