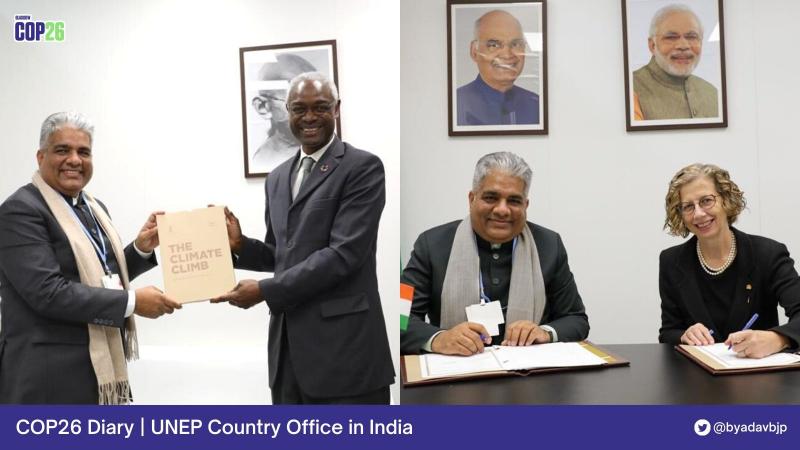 On the sidelines of COP26, I had the privilege of holding a bilateral meeting with Executive Secretary of the United Nations Convention to Combat Desertification Ibrahim Thiaw (UNCCD). Our meeting focused on the opportunities for land restoration and the commitments of the G20 countries on the same.

Mr Thiaw briefed me about the UNCCD COP15 scheduled to be held from 9th May 2022. He also enquired about the progress on the commitment of restoring 26 million hectare of degraded land.

Hon’ble Minister of India Shri Narendra Modi set the target of restoring 26-million-hectare land at UNCCD COP14. It is a matter of pride that is fast progressing on meeting its commitment as 11 million hectare has already been restored.

The 14th edition of the Conference of Parties (COP-14) to the UN Convention to Combat Desertification (UNCCD) ended on September 13, 2019. Held in Greater Noida, this was the first time that India hosted an edition of the UNCCD COP. The theme of the Conference was ‘Restore land, Sustain future’. Participating countries agreed to meet the Sustainable Development Goal target of achieving land degradation neutrality by 2030, a national target for action.

At COP14, PM Shri Modi said, “India takes pride in using remote sensing and space technology for multiple applications, including land restoration… We are working with a motto of per drop more crop. At the same time, we are also focusing on Zero budget natural farming… Going forward, India would be happy to propose initiatives for greater South-South cooperation in addressing issues of climate change, biodiversity and land degradation.”

He added, “India looks forward to making an effective contribution as we take over the co presidency for a two year term. For ages, we in India have always given importance to land. In Indian culture the Earth is held as sacred and treated as a mother.”

The PM reiterated India’s commitment to the global land agenda. “I also offer India’s support to those countries who may like to understand and adopt some of the LDN (Land Degradation Neutrality) Strategies that have succeeded in India. From this forum I would like to announce that India would raise its ambition of the total area that would be restored from its land degradation status from 21 Million Hectares to 26 Million Hectares between now and 2030.”

The Executive Secretary mentioned that in Africa 100 million hectare were planned to be restored across 11 counties and said that India’s experience will be very useful for the initiative in Africa.

I, on my part, informed Mr Thiaw about the Centre for Excellence for Land Degradation which uses satellite imagery to identify degraded land. The Executive Secretary agreed to share experiences and learn from good practices in other countries in the process.

In another significant event in Glasgow, India entered into a Host Country Agreement with the United Nations Environment Programme (UNEP) in a spirit of friendly cooperation for establishing a Country Office of UNEP in India. I signed the agreement along with UNEP Executive Director Inger Andersen.

The event comes at an important juncture, where cooperation in the field of environmental protection and biodiversity conservation and the promotion of sustainable development are vital.

India has been engaging with UNEP since 1972 dealing with critical environmental challenges. India is also one of the integral members of the United Nations Environment Assembly (UNEA), since its establishment in June 2012.

UNEP had been in discussions with the Government of India to formalise a Host Country Agreement. And what better occasion could be there, than this event of the decade - the Conference of Parties on Climate Change – COP 26 at Glasgow to formally sign this agreement.

The agreement is an instrument to establish and operate UNEP’s office in India and gives UNEP Country Office juridical personality in India. Having a Country Office in India will facilitate close coordination and interaction between the Government of India with UNEP on these multilateral environment conventions.