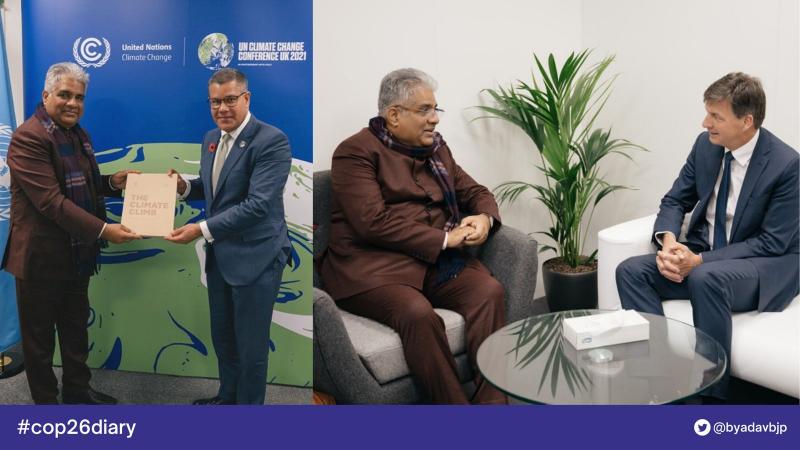 I spent a meaningful day with back-to-back discussions and meetings at COP26 in Glasgow as negotiations take centrestage at the summit. The Indian Prime Minister Shri Narendra Modi has already set the tone for the summit showing that India believes in action and not just talking when it comes to climate change and saving planet Earth from its vagaries.

On a day for negotiations, I met COP26 President Mr Alok Sharma as negotiations take centrestage at the summit. At the meeting I highlighted again the importance of upscaling climate finance, technology and capacity building support by developed nations. It cannot be stressed enough that this climate finance is absolutely critical for developing nations to achieve higher ambitions.

I also met my South Korean counterpart Ms Han Jeoung-ae and discussed ways to further collaboration on low carbon pathways especially in hard-to-abate sectors such as steel, cement, aviation. India and South Korea as members of Leadership Group for Industry Transition (LeadIT) can contribute significantly. LeadIT, which is an India-Swedish initiative, gathers countries and companies that are committed to reaching net zero carbon emissions from industry. It was encouraging to see that both countries agreed to deepen their ties and take forward their cooperation.

On the same day I also met Mr Angus Taylor, Minister for Energy and Emission Reduction, Australia. Both nations discussed furthering the partnership and exploring new opportunities to expand the relationship on climate change issues under global initiatives. Mr Taylor was appreciative of India’s stance on climate change and its multiple initiatives at the regional and global level to fight the scourge of climate change.

On the sidelines of COP26, I also had the opportunity of meeting Her Excellency Ms Kate Forbes, Minister of Finance and Economy, Scotland. On behalf of the Indian delegation, I extended our thanks and gratitude to the Scottish administration for holding the event so professionally in the testing and trying times of the Covid-19 pandemic. I also communicated to Ms Forbes our gratitude to the people of Scotland for being such wonderful hosts. Ms Forbes and I also discussed issues around climate change and exchanged our views on what can be done to improve upon things.

With PM Shri Narendra Modi ji setting new benchmarks and India resolving to move forward with a new commitment, I communicated to Ms Forbes that the transfer of climate finance and low-cost climate technologies becomes more important than ever. India, as already underslined by our Hon’ble Prime Minister expects a climate finance of $1 trillion at the earliest.

I was particularly delighted to meet the delegation of Confederation of Indian Industry. We held very detailed discussions on industry partnerships for climate change commitments made by Hon’ble Narendra Modi. The Indian industry has adopted a very accommodative, participatory and cooperative approach in meeting the country’s global commitments to climate change.  The delegation promised to further this commitment. The government too has promised that it will provide everything the industries need to meet their environmental commitments.