COP26 Diary | How India can meet its challenges

Prime Minister Shri Narendra Modi today aptly pointed out that climate change has been a great leveller for all those who inhabit planet Earth.

He made the remark while launching the Infrastructure for Resilient Island States (IRIS) as part of Coalition of Disaster Resilient Infrastructure (CDRI) at COP26 Summit in Glasgow. The Hon’ble PM said, “The past few decades have proven that nobody remains untouched by the effects of climate change. Be it developed nations or nations that are rich in natural resources. It’s a huge threat.”

Coalition for Disaster Resilient Infrastructure (CDRI) was launched by the Indian Prime Minister at the UN Climate Action Summit 2019 held in New York City in September 2019. IRIS will work to achieve sustainable development through a systematic approach to promote resilient, sustainable, and inclusive infrastructure in Small Island Developing States (SIDS).

“The launch of Infrastructure for Resilient Island States fills us with new hope and beliefs. This gives us the satisfaction to do something for the most vulnerable nations,” PM Shri Modi said.

It is a matter of pride for us Indians to note that we have not just been fulfilling our responsibilities as a global power in the fight against climate change, we are also taking the lead in the fight, emerging as a model worth emulating.

India has enhanced its NDC with the Hon’ble PM saying India will meet 50 per cent of its energy requirements from renewable energy by 2030 and setting the target of installing a non-fossil energy capacity of 500 GW by 2030. The promise of going to Net Zero by 2070 without the developed economies failing to put any money on the table for the developing world shows India is not just talking but acting with urgency on the climate front. India’s promise to reduce 1 billion tonne of carbon emission by 2030 is more than Organisation for Economic Co-operation and Development (OECD) and certainly what China has done.

Later in the day, PM Shri Modi underlined the need to ensure "transparent climate finance" as an important aspect of infrastructure creation during a roundtable event initiated by US President Joe Biden on the sidelines of the COP26 climate summit.

Speaking at the session on 'Accelerating Clean Technology Innovation and Deployment', PM Shri Modi said solar power can help re-establish the environmental balance that humankind disturbed during the industrial revolution.

Shri Modi advocated for a global solar power grid by giving out a call for "one sun, one world, one grid". The Prime Minister also made a significant announcement that ISRO is set to give the world a solar calculator application that will use satellite data to ascertain the solar power potential of any location. This calculator will help in deciding the location for solar power projects, he added.

Talking about the need to switch to solar energy, the PM said, “The industrial revolution was powered by fossil fuels. Their use helped many countries develop themselves but made our earth poor. The race for fossil fuels has also led to geopolitical tensions, but technology has given us a wonderful alternative.”

He added that Indian scriptures asserted hundreds of years ago that the sun gave life to everything on planet earth and is the primary source of energy.

The PM also participated in the Build Back Better for the World (B3W) roundtable and underlined the need to ensure four aspects in infrastructure creation: Climate resilience, incorporating traditional knowledge; prioritising poor and vulnerable; and sustainable and transparent finance that respects the sovereignty and territorial integrity of all countries.

I represented India at the LMDC meeting

Later in the day, I made a statement at the Like Minded Developing Countries (LMDC) Meeting in Glasgow and said that recognising the current challenges faced by developing countries requires intensified multilateral cooperation, not intensified global economic and geopolitical competition and trade wars.

I underlined India’s stated position that the delayed climate action and lack of leadership from developed countries in reducing emissions and supporting developing countries with finance and adaptation actions have now had ripple effects in terms of increased intensity and severity of weather impacts. I added that LMDC should collectively oppose any attempt to digress fundamental values and principles of United Nations Framework Convention for Climate Change (UNFCCC) and the Paris Agreement.

I reminded the gathering that India under the dynamic and visionary leadership of Hon’ble Prime Minister Shri Narendra Modi is working on ambitious climate actions in line with sustainable development priorities and that India has also pioneered global initiatives of International Solar Alliance, Coalition for Disaster Resilient Infrastructure and Leadership Group for Industry Transition. I requested the members of LMDC to join hands with India to strengthen the initiatives.

It is imperative that the LMDC countries strongly and jointly advocate for the timely and adequate provision of climate finance and technology transfer because it is incumbent upon the LMDC countries to ensure a balanced outcome with equal treatment to all agenda items including finance, adaptation, market mechanisms and response measures. 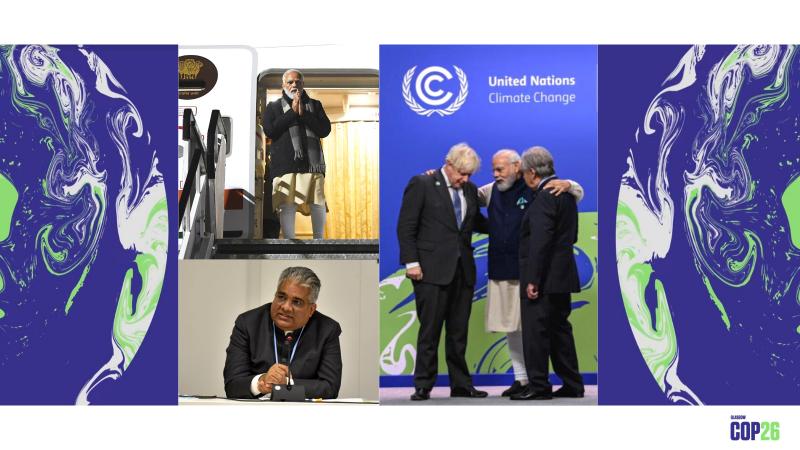