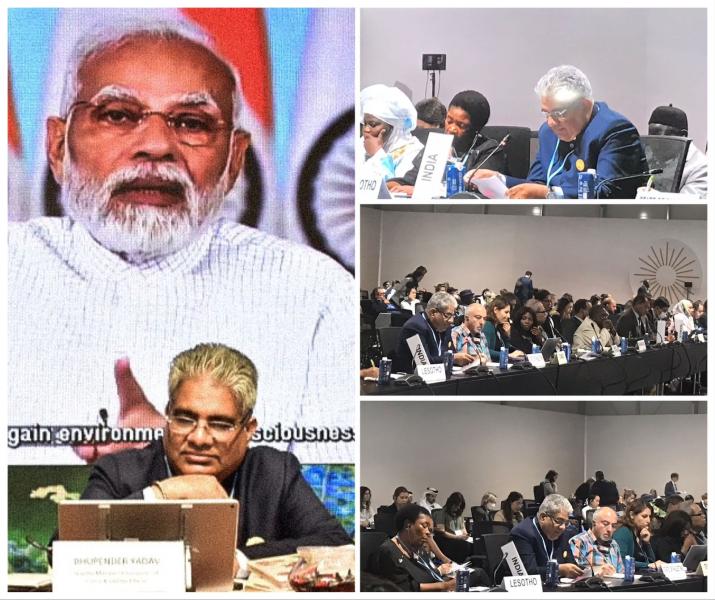 As my last engagement of the day at COP27 ongoing at Sharm El-Sheikh in Egypt, I addressed the High-Level Ministerial Dialogue on Climate Finance.

Our Hon’ble Prime Minister Shri Narendra Modi ji has time and again stated that India constitutes just 17 per cent of the world’s population, but our contribution to global carbon emissions is only four per cent. Against the developed world’s carbon footprint of four tonnes per head, the carbon footprint of an average Indian counts to only 1.5 tonnes. The Prime Minister has stated though we are not part of the problem, we will do everything to collectively find and implement a solution. The Hon’ble PM has said even as we are doing our bit to be part of the solution, the developed world must own up to its responsibility which falls on its shoulders by virtue of being historical polluters.

Speaking at the event as a representative of my country, I stated that access to finance and technology in developing countries is a must if we expect to protect earth and ourselves from apocalyptic changes. The commitment made by the developed countries to mobilize $100 billion from diverse sources by 2020 was a meagre amount and remains unachieved till now. I highlighted that the current needs of developing countries are estimated to be in the order of trillions.

High transaction costs for accessing project preparation grants and considerable co-financing requirements from the developing country need to be addressed. Slow disbursements, lack of flexibility to adapt to changing requirements, and long complex approval procedures with stringent eligibility criteria make access to climate finance difficult. It is not the absence of a bankable project pipeline, but the procedures, inflexibility in approach, and lack of trust with respect to direct access entities that is the problem.

The new collective quantified goal for the period post-2025 needs to be an ambitious mobilisation target at grant/concessional term. We require an ambitious flow of financial resources from various sources — public and private with the developed countries playing a pivotal role in incentivising flows to the developing countries so that finance— the key means of implementation — is at grant/concessional rates. The Nationally DeterminedContributions and the Needs determination reports could be a good basis to estimate the requirement. We are also of the view that action to improve the functioning of the financial mechanism to enable access is also critical.

I said that there is only a small window of opportunity to rectify a problem that has accumulated over the centuries. It is really time for concerted action if we want to curtail temperature rise to sustain life.