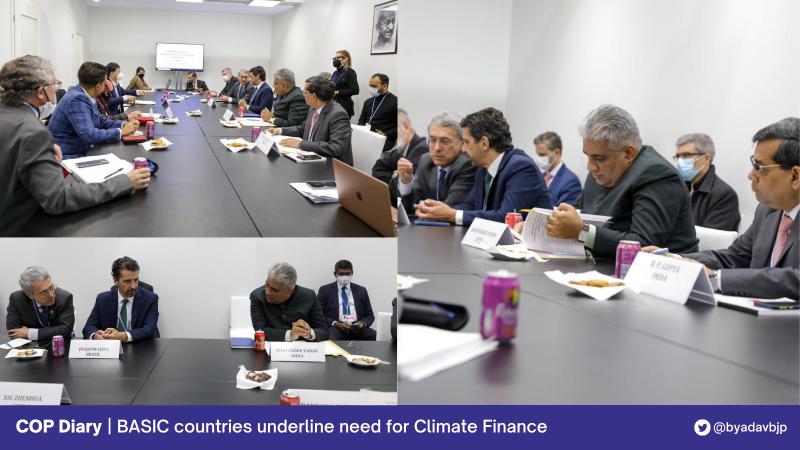 On November 10, I chaired a meeting of the Ministers of the BASIC (Brazil, South Africa, India and China) Group met at the 26th Conference of Parties to the United Nations Framework Convention on Climate Change (COP 26) in Glasgow, United Kingdom.

The Ministers highlighted that despite the tremendous developmental challenges and pressures of poverty eradication, which have been exacerbated by the Covid-19 pandemic, the BASIC countries continue to lead from the front on climate change actions. Ambitious climate change targets announced by the BASIC Group are testimony to the seriousness that BASIC nations accord to tacking climate change.

H.E Minister of the Environment of Brazil Joaquim Pereira Leite reassured his country’s full commitment to being part of the global response to tackle climate change by supporting the Glasgow Leaders’ Declaration on Forests and Land Use. Brazil also announced new climate goals at the meeting.

On the other hand, South Africa submitted an updated and significantly more ambitious Nationally Determined Contribution (NDC) to the Paris Agreement ahead of COP26. The updated NDC brings forward the peaking of South Africa´s emissions by a decade and contains detailed information on adaptation and the enabling means of implementation support required from the international community.

While India is amongst the few countries whose NDCs are already compliant with the temperature goal of the Paris Agreement, the Hon’ble Prime Minister of India Shri Narendra Modi announced further enhancements to India’s Climate ambitions at the World Leaders’ Summit at COP 26 in Glasgow.

Meanwhile, China aims to peak carbon dioxide emissions before 2030 and achieve carbon neutrality before 2060. For 2030, China will lower its carbon dioxide emissions per unit of GDP by over 65 per cent from the 2005 level, increase the share of non-fossil fuels in primary energy consumption to around 25 per cent, increase the forest stock volume by 6 billion cubic meters from the 2005 level, and bring its total installed capacity of wind and solar power to over 1.2 billion kilowatts. H.E. XI Jinping, President of the People’s Republic of China addressed at the World Leaders Summit at COP 26 in written statement and pointed out that we need to uphold multilateral consensus, focus on concrete actions and accelerate the green transition.

The Ministers gathered at yesterday’s meeting highlighted that the BASIC group and other developing countries have made the first move, coming forward with high ambition despite not bearing historical responsibility for causing climate change. They now expect developed countries to show leadership and respond with a matching progression of effort. The positive sentiments expressed in the COP26 Summit should now be transformed into action and infuse the negotiating positions in the formal UNFCCC process.

The Ministers expressed concern that climate finance provided by developed countries has fallen short of the USD 100 billion per year commitment by 2020 and that finance tends to be provided with unilateral conditionality and eligibility criteria, as well as in the form of loans, rather than grants, which aggravates the debt crisis. Ministers underlined that developed countries must urgently step forward to fulfil their obligations and mobilise at least USD 100 billion per year from 2021 to 2025.

The meeting expressed concern that Adaptation is not being accorded the balanced and substantive attention it deserves in the UNFCCC process.